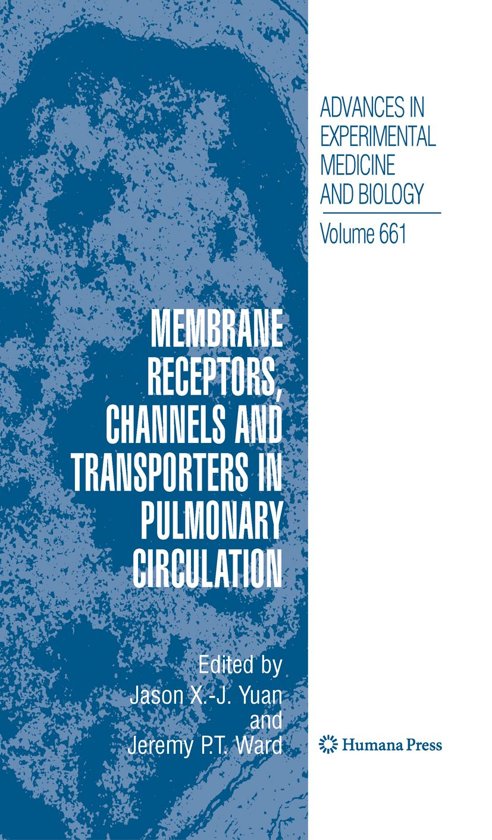 Membrane Receptors, Channels and Transporters in Pulmonary Circulation is a proceeding of the 2008 Grover Conference (Lost Valley Ranch and Conference Center, Sedalia, Colorado; September 3-7, 2008), which provided a forum for experts in the fields of those receptors, channels and transporters that have been identified as playing key roles in the physiology and pathophysiology of the pulmonary circulation. The book rigorously addresses: i) recent advances in our knowledge of receptors, channels and transporters and their role in regulation of pulmonary vascular function; ii) how modulation of expression and function of receptors, channels and transporters and their interrelationships contribute to the pathogenesis of pulmonary vascular disease; and iii) the therapeutic opportunities that may be revealed by enhancing our understanding of this area. The overall goal was to explore the mechanisms by which specific receptors, channels and transporters contribute to pulmonary vascular function in both health and disease, and how this knowledge may lead to novel interventions in lung dysplasia, pulmonary edema, lung injury, and pulmonary and systemic hypertension to reduce and prevent death from lung disease. Membrane Receptors, Channels and Transporters in Pulmonary Circulation is divided into six parts. Part 1 (Ion Channels in the Pulmonary Vasculature: Basics and New Findings) is designated for basic knowledge and recent findings in the research field of ion channels in pulmonary circulation. There are five chapters in Part I discussing the function, expression, distribution and regulation of various ion channels present in pulmonary vascular smooth muscle cells and how these channels are integrated to regulate intracellular Ca2+ and cell functions. Part II (TRP Channels in the Pulmonary Vasculature: Basics and New Findings) is composed of five chapters that are exclusively designed to discuss the role of a recently identified family of cation channels, transient receptor potential (TRP) channels, in the regulation of pulmonary vascular tone and arterial structure. Part III (Pathogenic Role of Ion Channels in Pulmonary Vascular Disease) includes four chapters that discuss how abnormal function and expression of various ion channels contribute to changes in cell functions and the development of pulmonary hypertension. Part IV (Receptors and Signaling Cascades in Pulmonary Arterial Hypertension) consists of five chapters devoted to the role of bone morphogenetic protein receptors, Notch receptors, serotonin receptors, Rho kinase and vascular endothelial growth factor receptors in the development of pulmonary arterial hypertension. Part V (Receptors and Transporters: Role in Cell Function and Hypoxic Pulmonary Vasoconstriction) includes four chapters designed to illustrate the potential mechanisms involved in oxygen sensing and hypoxia-induced pulmonary vasoconstriction and hypertension. Part VI (Targeting Ion Channels and Membrane Receptors in Developing Novel Therapeutic Approaches for Pulmonary Vascular Disease) consists five chapters which discuss the translational research involving on membrane receptors, channels and transporters, including their potential as novel drug targets. We hope that Membrane Receptors, Channels and Transporters in Pulmonary Circulation will allow readers to foster new concepts and new collaborations and cooperations among investigators so as to further understand the role of receptors, channels and transporters in lung pathophysiology. The ultimate goal is to identify new mechanisms of disease, as well as new therapeutic targets for pulmonary vascular diseases. An additional outcome should be enhanced understanding of the role of these entities in systemic vascular pathophysiology, since the conference will include researchers and clinicians with interests in both pulmonary and systemic circulations.