Memoirs of a Monticello Slave--Dictated to Charles Campbell in the 1840's by Isaac, One of Thomas Jefferson's Slaves 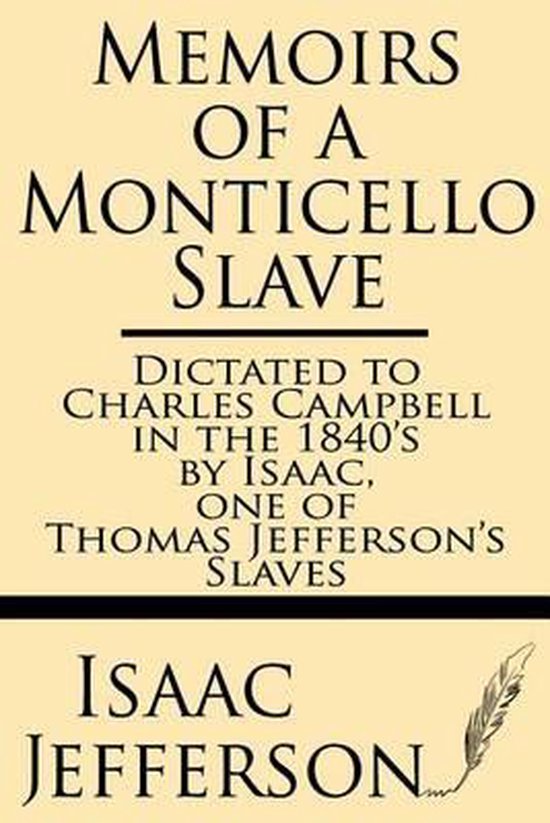 Memoirs of a Monticello Slave--dictated to Charles Campbell in the 1840's by Isaac, one of Thomas Jefferson's slaves
By Isaac Jefferson
Contents
Foreword
Isaac Jefferson's Memoirs
Notes
Biographical Data concerning Isaac
Biographical Data concerning Campbell
Excerpt from Chapter I
Isaac Jefferson was born at Monticello: his mother was named Usler but nicknamed Queen, because her husband was named George and commonly called King George. She was pastry-cook and washerwoman: stayed in the laundry. Isaac toated wood for her: made fire and so on. Mrs. Jefferson would come out there with a cookery book in her hand and read out of it to Isaac's mother how to make cakes, tarts and so on.
Mrs. Jefferson was named Patsy Wayles, but when Mr. Jefferson married her she was the widow Skelton, widow of Batter Skelton. Isaac was one year's child with Patsy Jefferson: she was suckled part of the time by Isaac's mother. Patsy married Thomas Mann Randolph. Mr. Jefferson bought Isaac's mother from Col. William Fleming of Goochland. Isaac remembers John Nelson, an Englishman at work at Monticello: he was an inside worker, a finisher. The blacksmith was Billy Ore; the carriage-maker Davy Watson: he worked also for Colonel Carter of Blenheim, eight miles from Monticello. Monticello-house was pulled down in part and built up again some six or seven times. One time it was struck by lightning. It had a Franklin rod at one end. Old Master used to say, "If it hadn't been for that Franklin the whole house would have gone." They was forty years at work upon that house before Mr. Jefferson...
------------------------------------------------------------------------------------------------------------------------------------------
Windham Press is committed to bringing the lost cultural heritage of ages past into the 21st century through high-quality reproductions of original, classic printed works at affordable prices.
This book has been carefully crafted to utilize the original images of antique books rather than error-prone OCR text. This also preserves the work of the original typesetters of these classics, unknown craftsmen who laid out the text, often by hand, of each and every page you will read. Their subtle art involving judgment and interaction with the text is in many ways superior and more human than the mechanical methods utilized today, and gave each book a unique, hand-crafted feel in its text that connected the reader organically to the art of bindery and book-making.
We think these benefits are worth the occasional imperfection resulting from the age of these books at the time of scanning, and their vintage feel provides a connection to the past that goes beyond the mere words of the text.
Toon meer Toon minder