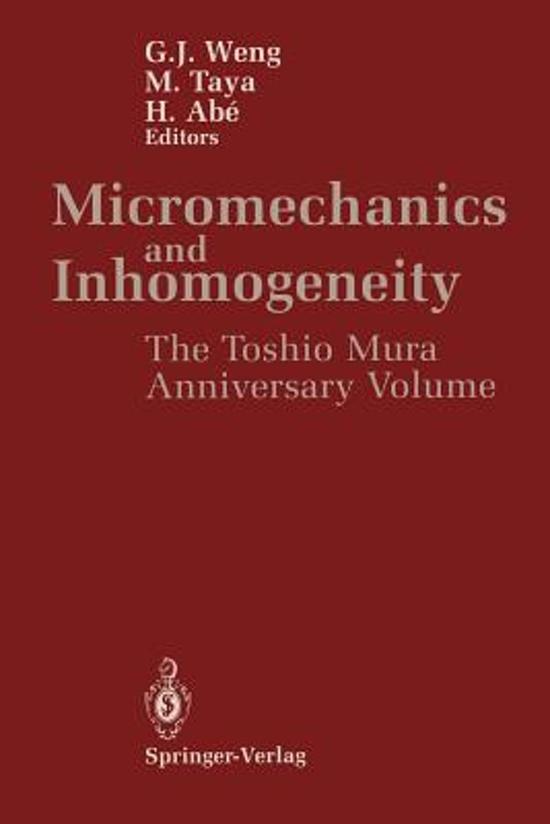 Toshio Mura has written extensively on micromechanics over the years, and in part due to his writings and many others in the field, micromechanics has gradually emerged as a recognized discipline in the study of mechanics of materials. The idea is to bring both the mechanics and physics on the micro- scopic level to the macroscopic scale, so that the deformation and fracture processes of materials can be better understood. While much apparently remains to be done, this approach has already shed new light on certain selected topics and has proved to be fruitful. It is indeed a happy occasion to celebrate both Toshio's upcoming 65th birthday and the emergence of this young science at the same time. The volume contains thirty-seven original articles on the related topics of micromechanics and inhomogeneity; it is presented to Toshio by his friends, colleagues, and admirers as a wish for his good health and continuing pro- ductivity. The contributors belong to both the applied mechanics and the materials communities, all with a common belief that micromechanics is an indispensable area of research. It is hoped that this somewhat balanced structure will make the volume more useful to a wider range of readers, and that in the meantime it will still reflect more or less the spectrum of Toshio's lifelong works. As Editors we have at the outset set the highest possible standards for the book, with a keen anticipation that the volume will be widely circulated for many years to come.
Toon meer Toon minder