Minhaj Et Talibin A Manual of Muhammadan Law, According to the School of Shafii (Classic Reprint) 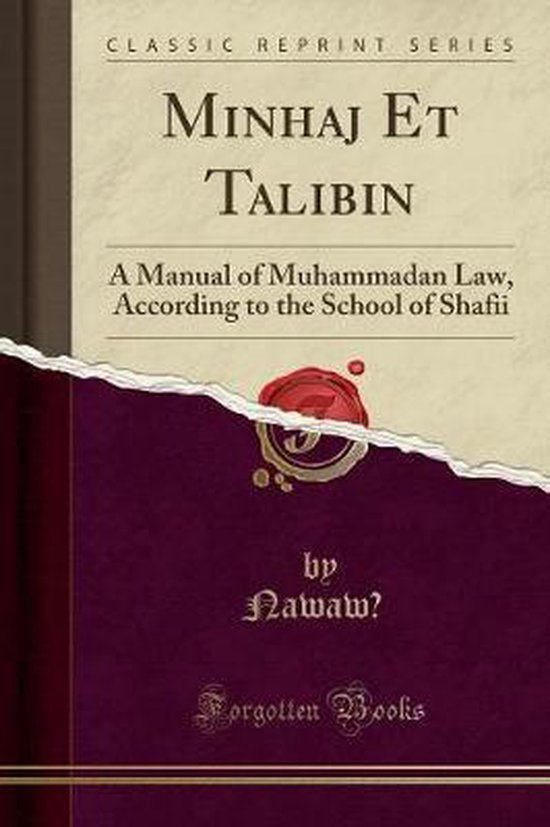 Excerpt from Minhaj Et Talibin: A Manual of Muhammadan Law, According to the School of Shafii
In the preface to his edition of the Fath el Karib in 1894, Mr. L. W. C. Van den Berg remarked that "from year to year European control over Moslem peoples is extending, so that it is unnecessary to insist upon the importance of rendering the two works that form the basis of the legal literature of the School of Shafii accessible, not only to a small number of Arabic scholars, but also to magistrates and political agents" to whom that language is for the most part unfamiliar. This being as true now as it was twenty years ago it is thought advisable to publish an English translation of the other and larger work referred to, the Minhaj et Talibin, which "occupies the first rank for deciding legal cases." In the preface to his edition of this treatise, published in 1882 at Batavia by the Government of the Netherlands Indies, Mr. Van den Berg explained that the French version, of which this book is a rendering into English, was not a mere literal translation of the concise Arabic text, which would have been unintelligible, but a paraphrase, based partly upon the Moharrer and the Commentary of Mehalli, and partly upon the two principal sixteenth-century commentaries on the Minhaj et Talibin - that is to say, the Tohfat-el-Mohtaj and the Nihayat el Mohtaj. It is not always possible to decide a question by reference to the Minhaj alone; and in such a case a Muhammadan juris - alim, fakih, mufti or kadi, as it may be - has recourse principally to the Tokfa and the Nihaya, which Dr. Th. Juynboll, in his Handbuch des islamischen Gesetzes, 1910, calls "the two standard works in the whole modern Fikh-literature of the School of Shafii." It is hoped, therefore, that the present publication may be of some practical utility in the direction above indicated, and at the same time not without interest to the student of comparative jurisprudence.
About the Publisher
Forgotten Books publishes hundreds of thousands of rare and classic books. Find more at www.forgottenbooks.com
This book is a reproduction of an important historical work. Forgotten Books uses state-of-the-art technology to digitally reconstruct the work, preserving the original format whilst repairing imperfections present in the aged copy. In rare cases, an imperfection in the original, such as a blemish or missing page, may be replicated in our edition. We do, however, repair the vast majority of imperfections successfully; any imperfections that remain are intentionally left to preserve the state of such historical works.
Toon meer Toon minder