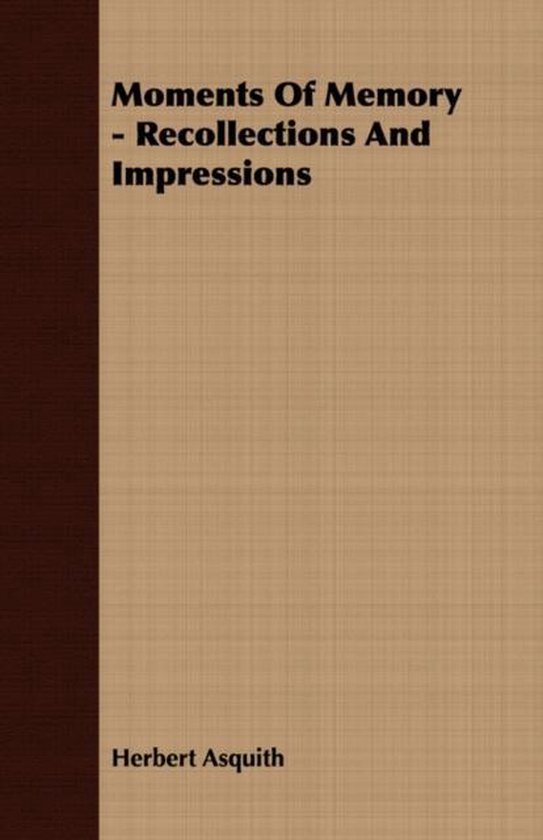 Tk rS K I T KTnnO VT 1 II M T Ti MOMENTS Q-ME pt Recollections and Impressions HERBERT ASQUITH ILLUSTRATED NEW WRK CHARLE SWfflfrfRRS SONS 1938 f, 1987, 1938, BY HERBERT ASQUTTH Printed in the United States of America All rights r served. No part of this booh may be reproduced in any form without the permission of Charfas Scribnefs Sons 7 58 1 1. 1 1. A. IN PREFACE Aong these memories and impressions my father, Lord Oxford is one of the chief figures, but they concern many other personalities, whom I came to know in a strange and stormy period. They begin during my fathers first marriage, pass on through later events and the years of the War, and end in recent times. The recollections in the early chapters are by necessity those of extreme youth, but I hope they may be of interest to those who knew my father, and may throw some slight pencils of light into an obscure part of his life. Men of his own time, who might describe this phase, are no longer alive, and of many incidents I am probably the only surviving witness In checking the sequence of events during these early years I have been helped by some letters of my mother, and in certain cases by my brother Arthur and my aunt Miss Evelyn Melland. In the later part of the book my memories of the War have been helped by letters I wrote at the time and the account of the British retreat from St. Quentin in March 1918 is based on entries in my diary which were made within a few days of the actions they describe. H. A, CONTENTS PACK L CRICKET IN KEATS GROVE . . . n II. EARLY FRIENDS . . . . . 28 III. GBASMERE AND LONDON .... 40 IV. THE JOURNEY TO SCOTLAND . . . 55 V. FACT AND FANCY ..... 65 VI. A NEW OUTLOOK ..... 80 VIL WINCHESTER ......92 VIII. SOME OXFORD CHARACTERS ., .112 IX. A GENEROUS SETTLEMENT . . .,128 X. ASQUITH AND BALFOUR . .139 XL FORCE AND FERMENT ., . . 155 XIL A POET IN REVOLT ..... 182 X1IL THE OUTBREAK OF WAR ., . 193 XIV. FLANDERS IN 1915 ..... an XV MEN AND PROBLEMS ..... 235 XVL THE SOMME AND WHITEHALL . . .247 XVIL ARRAS AND PASSCHENDAELE . . .278 XVIII. THE BATTLE IN THE MIST, . .311 XIX LORD OXFORD IN LATER YEARS . 353 LIST OF ILLUSTRATIONS H, H, A, IN 1894 Frontispiece LETTER PROM H, H, A. ACCEPTING AN INVITATION TO HIS OWN WEDDING pay 15 FACING PAGE HELEN ASQUITH 48 H, H, A. AND MAEGOT ASQUITH, 1895 88 D, H. LAWRENCE, 1914 184 BARRIB, HAUDANB AND BRUCE 140 RAYMOND ASQUITH, 1915, 156 H, H, A. AND AUGUSTINE BIRRELL AT THE WHARF ., 360 LORD OXFORD IN LATER YEARS, 368 . My thanks are due to W. Heinemann and Co, for permission to include the portrait of D H, Lawrence. H. A, Chapter I CRICKET IN KEATS GROVE In August 1877, a month before his twenty-fifth birthday, my father married Helen Melland, and shortly after their marriage they went to live in a small cream-coloured Georgian house in Hampstead, a few hundred yards from the heath. The house stood in the middle of a garden of fruit-trees pears, apples, and a lonely mulberry, which, fine though it was, could in no way compete with that other mulberry tree that hung over the lawn of Wentworth Place on the opposite side of the road, where Keats had written his poetry sixty years before. The name of the road in those days was John Street, but it is now known as Keats Grove. It was shaded in summer by the foliage of planes, poplars, limes, and here and there a catalpa it had arches rising over its windows, like lifted eyebrows, and looked out with afriendly face, twinkling through the leaves of its trees. At the back of the house was my fathers diminutive study the walls were covered with tiers of books, many of which were prizes which he had won at School a brownish faded photograph of Apollo hung near the door there was usually a chess-board in the xx
Toon meer Toon minder