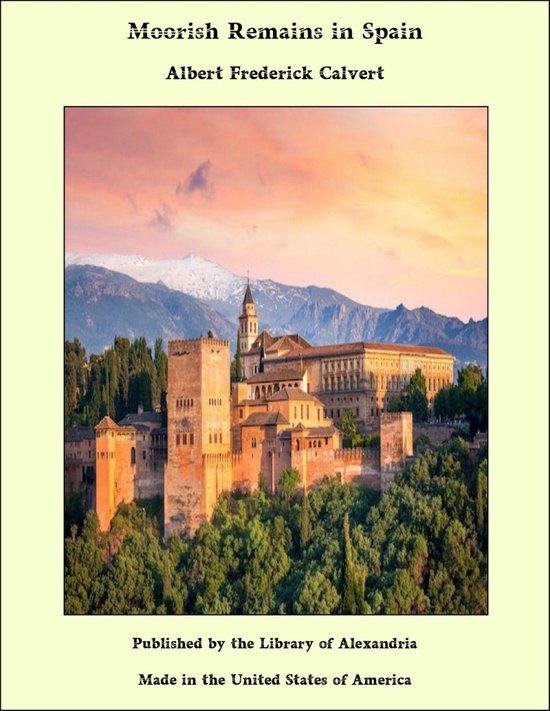 THE inception of my work on The Alhambra, to which this book is designed to be the companion and complementary volume, was due to the disappointing discovery that no such thing as an even moderately adequate souvenir of the Red Palace of Granada, "that glorious sanctuary of Spain," was in existence. It was written at a time when I shared the very common delusion that the Alhambra was the only word in a vocabulary of relics which includes such Arabian superlatives as the Mosque at Cordova, the Gates and the Cristo de la Luz of Toledo, and the Alcazar at Seville. I had then to learn that while the Alhambra has rightly been accepted as the last word on Moorish Art in Spain, it must not be regarded as the solitary monument of the splendour and beauty with which the Arabs stamped their virile and artistic personality upon Andalus. In the course of frequent and protracted visits to Spain I came to realise that the Moors were not a one-city nation; they did not exhaust themselves in a single, isolated effort to achieve the sublimely beautiful. Before the Alhambra was conceived in the mind of Mohammed the First of Granada, Toledo had been adorned and lost; Cordova, which for centuries had commanded the admiration of Europe, had paled and waned beside the increasing splendour of Seville; and the "gem of Andalusia" itself had been wrested from the Moor by the victorious Ferdinand III. But each in turn had been redeemed from Gothic tyranny by the art-adoring influence of the Moslem. Their dominion, their politics, and their influence is a tale of a day that is dead, but it survives in the monuments of their Art, which exist to the glory of Spain and the wonder of the world. The Arabian sense of the beautiful sealed itself upon Cordova, and made the city its own; it blended with the joyous spirit of Seville; it forced its impress upon the frowning forehead of Toledo. To see the Alhambra is not to understand the wonders of the Alcazar; the study of Moorish wizardry in Toledo does not reveal, does not even prepare one, for the bewildering cunning of the Mosque in Cordova. In Cordova—this gay, vivacious overgrown village, which gleams serene in a setting of vineyards and orange groves—the spirit of the Moors still breathes. Rome wrested the city from Carthage; the Goths humbled it to the dust. But, under the Moors, Cordova became the centre of European civilisation, the rival of Baghdad and Damascus as a seat of learning, the Athens of the West, and second only in sanctity to the Kaaba of Mecca. Its Cathedral first came into being as a temple of Janus; it has been both a basilica and a mosque. But the magic art of the Mohammedan, which effaced the imprint of the Roman spear, has survived the torch of the Holy Inquisition, and to-day Cordova is the most exquisitely beautiful Moorish monument in Spain. In Seville, on the spot where Roman, Visigoth, and Moslem have each in turn practised their faith, the Cathedral bells now hang above the Arabian tower of the mosque, and the spire of the temple of the faithful has become the world-famous Giralda, which dominates the city. Moorish fountains and patios are found at Malaga, and Granada, and Toledo, but one comes to "La Tierra de Maria Santisima" to see them at their loveliest, while the Alcazar is perhaps the best preserved and most superbly-decorated specimen of the Moorish citadel-palace that Europe has to show.