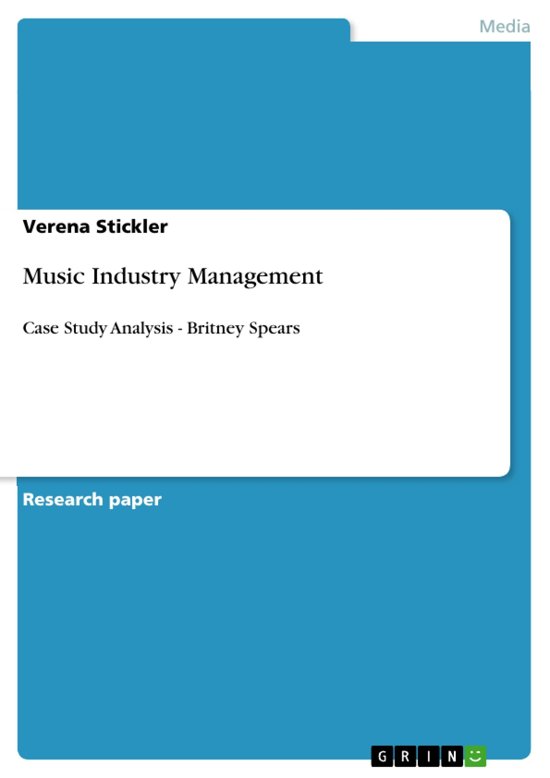 Research Paper (undergraduate) from the year 2008 in the subject Communications - Broadcast and entertainment, grade: 1,6, London Metropolitan University (London Metropolitan University), language: English, abstract: Britney Spears is an American pop music singer, songwriter, dancer, actress and author. She has sold over 83 million records worldwide and is the only female in music history to have had her first four albums debut at No. 1. Britney's extremely successful career took off in the late 90's and was targeted at a teenage audience, with emphasis put on her projected image. Her at times controversial music videos and live performances have contributed to her success immensely as have product endorsements and merchandising. Britney, who was discovered by Larry Rudolph in 1995, was created and supported by a strong management team. Ever since splitting from long time manager Rudolph in 2004, Britney's management has changed constantly with even her being her own manager at one point. Combined with her current personal struggles this is having a rather negative impact on her career, with her image suffering greatly under these circumstances. Although sales for her newest album 'Blackout' have been doing well, critics tend to credit the producers rather than Britney herself. Other critics question as to whether the album, which is predominantly perceived as good, is enough to maintain her successful career. Taking all these current factors into consideration, it is advisable to contract a strong and stable management team for Britney who will step in to save her flagging career and simultaneously help her regain her high public profile.