My Armenian Genesis the Last Survivor 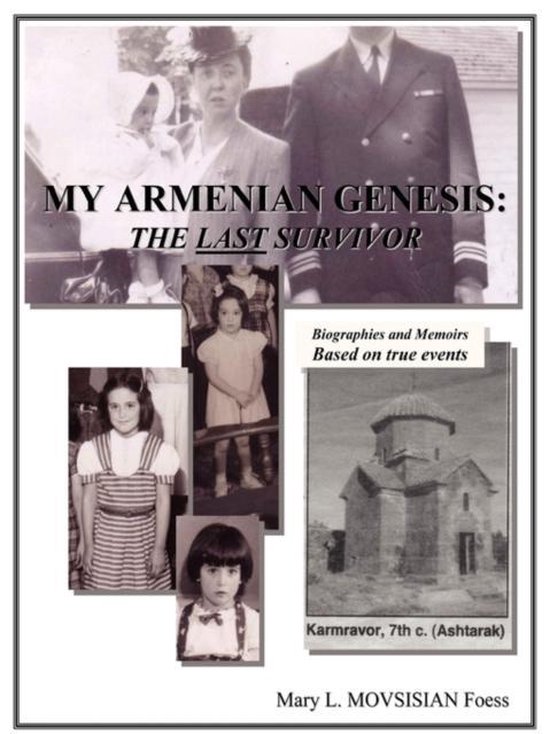 A primal scream erupted in the Charity Ward of Providence Hospital, Washington., D.C., in September of 1945. Crying out for Mother, Baby Movsisian felt her loving grip only moments after birth, and then sensed a struggle as those same, gentle hands would NOT let go. A white-uniformed nurse intervened. Baby's bassinet was wheeled away once the hospital staff washed away her birth blood. Judith became her 'given name', the one soon to appear on her original birth certificate. The significance of this name would be revealed to Mary 43 years later, February, 1988. The tag on her tiny bed read: Charity Ward, bottle feed, no contact with Mother. On September 27 this newborn and her mother left the hospital, but separately. Judith, now renamed 'Mary', would soon be peppered, as early as age 3, with her adoptive family's friends', and teachers' unrelenting questions: ''Oh, my! Where did those huge, dark brown eyes come from? The olive skin? Who is your real mother?'' Not one of them knew about "Mother Armenia', or how this surname connected to one of the oldest-known civilizations on Earth. History would dictate that this newborn would be the very last one to inherit both the Movsisian name from a region half-way across the planet Earth, and the nearly extinct, female mitochondrial DNA from Grandmother, Yeghsapert Deorian Movsisian. Mary's grandparents, uncle, and two cousins were the sole surviving family members from the Armenian Genocide, the area of the worst destruction being their village: Nor Kegh, Charsandjak, Kharpert, located in the Euphrates River Valley area. This Cradle of Civilization area, full of professionals, suffered the greatest ruin of businesses, churches, homes, and slaughter of Armenians! Each step those few who were not tortured, then killed, took on their escape route to freedom, that which was aided by the Kurds and the Greeks, gave Mary and her descendants, yet unborn, 1 more day to live on Earth. Grandfather had arrived in 1913, 3 years before the date when the massacres were heightened. Manoog Movsisian and 3 other immigrant men soon founded the very first Armenian Apostolic Church (Christian) in the Midwest. Located in the West Pullman area of Chicago, Illinois, Holy Savior Armenian Apostolic Church was consecrated on October 26, 1924. Mary's grandfather, their first choir director, had the voice of an angel. Once her grandmother survived the grueling journey from her homeland on the escape routes, she settled in Cherbourg, France, with her son, Korean, and other cousins, who also 'made it out alive' during the massive exodus from their tiny village's atrocities - - done by the conquering Turks. In 1921, at age of 9, both he and Grandmother emigrated to the U.S.A. Soon reunited with Grandfather, she bore 3 more children: Mother, another Uncle, and Aunt. Fate would gift to Mary's older, tough and smart uncle, attorney Korean Movsisian, the honor of pleading 2 cases for the U.S. Supreme Court, Washington, D.C. Mary's destiny the first 39 years of her life would be to wear the cloak of secrecy, an enigma, re: Mother's and Father's identity. Her birth records had been kept under court seal in Montgomery County Circuit Court in Rockville, Maryland. Falsified, then issued over 25 months following her date of birth, this certificate now listed her parents as David D. and Eathel G. Mc CALLUM Letts. Mary's adoptive father, Lt. Commander David D. Letts, served in the Department of War, later closed and replaced by the Pentagon, in Washington, D.C., from 1942 through mid-1948. At age 38, she learned about her inherited gifts from each parent: membership in one of the oldest civilizations on Earth, the first to accept Christianity in 301 A.D., and also one which included the earliest settlers from the British Isles, soon to be owners of huge plantations in Maryland and Virginia. She researched 5 indirect family-line Mayflower passengers, 16 presidential lines, and 16 founding fathers, signers of the Declaration of Independence. Mary's most famous ancestor, however, was William I, the Conqueror, the first Norman king of England. Mary, upon learning this fact on ancestry.com, did recall, the exact day she had won a contest at Stoner Elementary School, Lansing Township, Michigan, for her 6th grade in 1957. She was the only student who knew the correct answer: 1066, when William invaded and won the Battle of Hastings. But, how did Mary solve the remaining mysteries of her secret origins? Why she was given up for adoption? Who had found 'the letter,' in a box, well-hidden for 42 years, in mint condition, along with the original envelope? What did the letter reveal? Who penned it? Who had put it in that closet? And, how did this miracle-find result in the highly unlikely, unsealing of her adoption file from the Montgomery County Courthouse, Rockville, Maryland? Who had stepped in to help Mary and why? Mary had sent a plea….