My Family and Other Animals Penguin Essentials 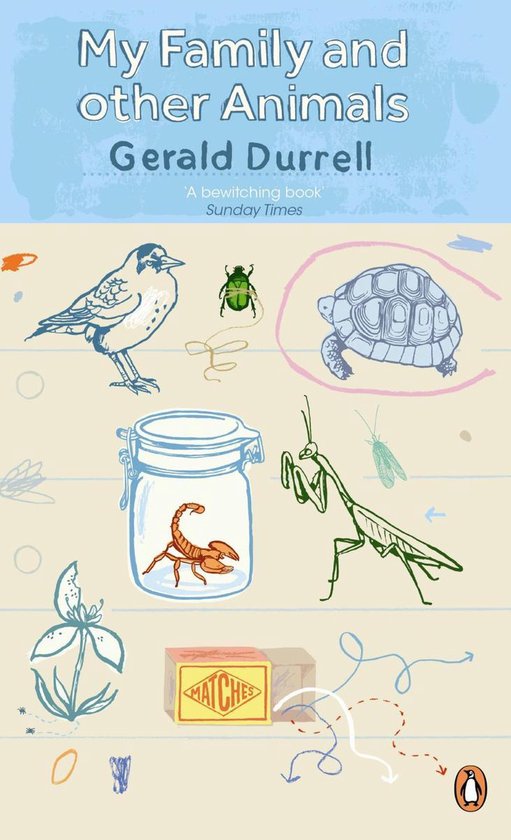 "Gerald Malcolm Durrell, OBE (7 January 1925 – 30 January 1995) was a British naturalist, zookeeper, conservationist, author and television presenter. He founded what is now called the Durrell Wildlife Conservation Trust and the Jersey Zoo on the Channel Island of Jersey in 1959. He wrote a number of books based on his life as an animal collector and enthusiast. The most famous is ""My Family and Other Animals"". He was the youngest brother of novelist Lawrence Durrell.

My Family and Other Animals is the bewitching account of a rare and magical childhood on the island of Corfu by treasured British conservationist Gerald Durrell, beautifully repackaged as part of the Penguin Essentials range. 'What we all need,' said Larry, 'is sunshine...a country where we can grow.' 'Yes, dear, that would be nice,' agreed Mother, not really listening. 'I had a letter from George this morning - he says Corfu's wonderful. Why don't we pack up and go to Greece?' 'Very well, dear, if you like,' said Mother unguardedly. Escaping the ills of the British climate, the Durrell family - acne-ridden Margo, gun-toting Leslie, bookworm Lawrence and budding naturalist Gerry, along with their long-suffering mother and Roger the dog - take off for the island of Corfu. But the Durrells find that, reluctantly, they must share their various villas with a menagerie of local fauna - among them scorpions, geckos, toads, bats and butterflies. Recounted with immense humour and charm My Family and Other Animals is a wonderful account of a rare, magical childhood. 'Durrell has an uncanny knack of discovering human as well as animal eccentricities' Sunday Telegraph 'A bewitching book' Sunday Times Gerald Durrell was born in Jamshedpur, India, in 1925. He returned to England in 1928 before settling on the island of Corfu with his family. In 1945 he joined the staff of Whipsnade Park as a student keeper, and in 1947 he led his first animal-collecting expedition to the Cameroons. He later undertook numerous further expeditions, visiting Paraguay, Argentina, Sierra Leone, Mexico, Mauritius, Assam and Madagascar. His first television programme, Two in the Bush which documented his travels to New Zealand, Australia and Malaya was made in 1962; he went on to make seventy programmes about his trips around the world. In 1959 he founded the Jersey Zoological Park, and in 1964 he founded the Jersey Wildlife Preservation Trust. He was awarded the OBE in 1982. Encouraged to write about his life's work by his brother, Durrell published his first book, The Overloaded Ark, in 1953. It soon became a bestseller and he went on to write thirty-six other titles, including My Family and Other Animals, The Bafut Beagles, Encounters with Animals, The Drunken Forest, A Zoo in My Luggage, The Whispering Land, Menagerie Manor, The Amateur Naturalist and The Aye-Aye and I. Gerald Durrell died in 1995.
Toon meer Toon minder