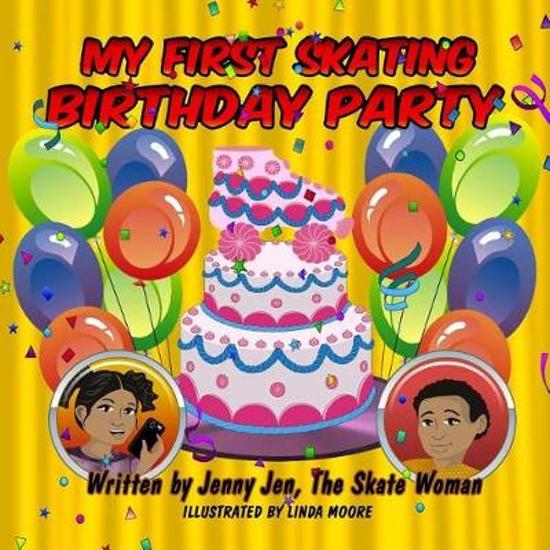 Now that the family has learned all the basics, its time to get down to some serious fun!When the twins, Blake and Kate, decide to have their birthday party at the local skating rink, they invite all their friends, even those who dont know how to skate. The twins point their friends toward SKATE 101, so everybody will be ready when the big day comes!There is fun and food for all at the rink, along with a very special surprise, when SKATE WOMAN shows up to help the twins celebrate their special day-- on wheels!The party goers have a blast! They get to do the chicken dance, the hokey pokey, the train (choo choo), play other games and sing along with the only birthday skate song by Skate Woman. They also get excited when a special superhero pops in to skate and celebrate!This is the fourth volume in the MY FIRST SKATE BOOK series, a collection of books designed to open a whole new world of fun and rewarding activity for the entire family. Blake and Kate and their buddies hit the rink floor with SKATE WOMAN and her amazing friends, skating to songs like The Chicken Dance, The Hokey Pokey, and The Boogie Back Rap.Jenny Jen aka SKATE WOMAN, has skated her way across magazines, newspapers, television, and radio-- including Discoverys The Learning Channel, Comcast SportsNet, and a variety of shows on FOX, NBC, ABC and CBS. Basketball legend Dr. J (aka Julius Erving) and actor John Cusack are among her celebrity students. She also worked with 5-time Olympic Gold Medal speed skating champion Bonnie Blair.Determined to make skating easy and fun for everyone, she started rhyming like Dr. Seuss and reasoning like Sir Isaac Newton. She raps her rhymes on skates to demonstrate. To share her instructional rhymes with the world, she formed a band, Jenny Jen and Taki76 (formerly Phat Sk8trax). They landed a top ten single of the year in the Village Voice with their debut track, Boogie Back Rap. Jenny Jen was featured in XXL Magazine, the worlds biggest hip hop magazine. And now, the worlds first and only rapping skate teacher, and skating superhero, is moving into new territory, helping young and old alike navigate the wonderful world of skating with her new series of books. Skating is everywhere-- in movies, on television, and in rinks and skate centers in every community. Skating pros appear in TV shows, commercials, music videos, musicals, cartoons, movies, and the news. Develop a basic understanding of skating and related vocabulary. Have fun while improving coordination, establishing healthy physical fitness and exercise habits, and so much more. The MY FIRST SKATE BOOK series is one that parents and children will share and enjoy for years to come. The bright, dynamic artwork captures the imagination, and the clever, tongue-twisting rhymes helps improve language skills, both written and spoken. Kids just learning to read, and more advanced readers who want to improve their skills, will love all the books in the My First Skate Book Series.
Toon meer Toon minder