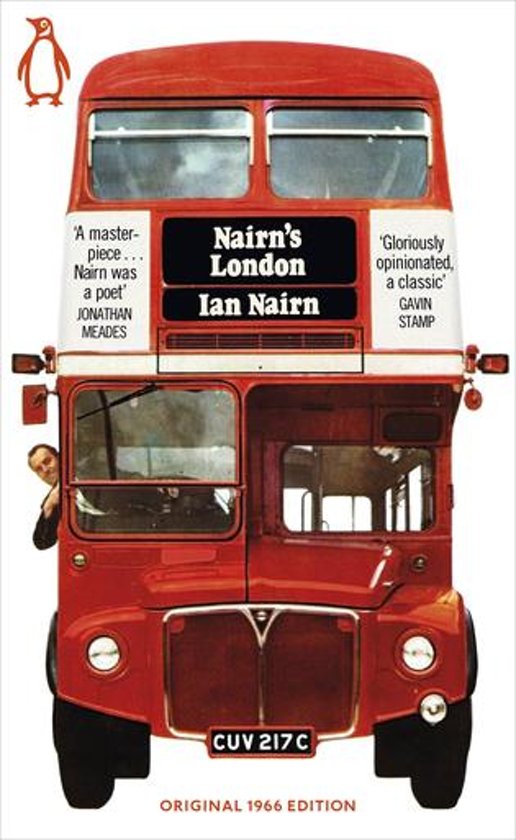 
'This book is a record of what has moved me between Uxbridge and Dagenham. My hope is that it moves you, too.'


Nairn's London is an idiosyncratic, poetic and intensely subjective meditation on a city and its buildings. Including railway stations, synagogues, abandoned gasworks, dock cranes, suburban gardens, East End markets, Hawksmoor churches, a Gothic cinema and twenty-seven different pubs, it is a portrait of the soul of a place, from a writer of genius.

Ian Nairn taught me and a lot of us to look at the world -- David Thomson He had the gift of the potent image, making buildings and places animate or human ... anyone who cares even slightly about their surroundings should be intensely grateful ... His common themes are a passion for character, distinctiveness, contrast and surprise, for the unselfconscious and the visceral, and a matching loathing for the statistical, the phoney, the cold, the tepid, the routine, the indifferent and for what he called the prettification of places ... His approach was personal and visual, to capture emotional reactions in front of buildings, and record them with literate beauty -- Rowan Moore * Observer * One of the best and oddest guidebooks to any city ever written -- Simon Bradley * Evening Standard * Arguably the finest architectural writer of the twentieth century ... vivid, sensual descriptions of buildings, a way of writing about architecture that I'd never imagined possible before ... his masterpiece ... a work of architectural criticism and architectural history of huge sophistication and erudition, a rum, bawdy and drunken dance up a back alley, a hymn to those rare moments where the individual and the collective meet -- Owen Hatherley His attacks on the banality of Britain's postwar buildings made Ian Nairn an inspiration for a generation of architectural critics. -- Jonathan Glancey * Guardian * One of the finest and most evocative books ever written about a city ... He could see beauty where others just saw dirt, chaos and decay. He delighted in the obscure ... it took me to wonderful buildings and unusual places I probably would not otherwise have discovered. Everything he wrote is worth rereading. During his short, furious, productive career, Ian Nairn had a more beneficial effect on the face of Britain than any other architectural writer of his time ... a great and hugely rewarding book -- Gavin Stamp He taught us how to look -- Deyan Sudjic Once you discover him, which in my case was through my dad's copy of Nairn's London, you want to read everything he's written ... He was a literary romantic, with a poetic sensibility -- Andrew M. Brown * Daily Telegraph * A masterpiece ... Nairn was a poet ... Nairn's London belongs to no genre save its own, it is of a school of one ... There is barely a page which does not contain some startling turn of phrase -- Jonathan Meades
Toon meer Toon minder