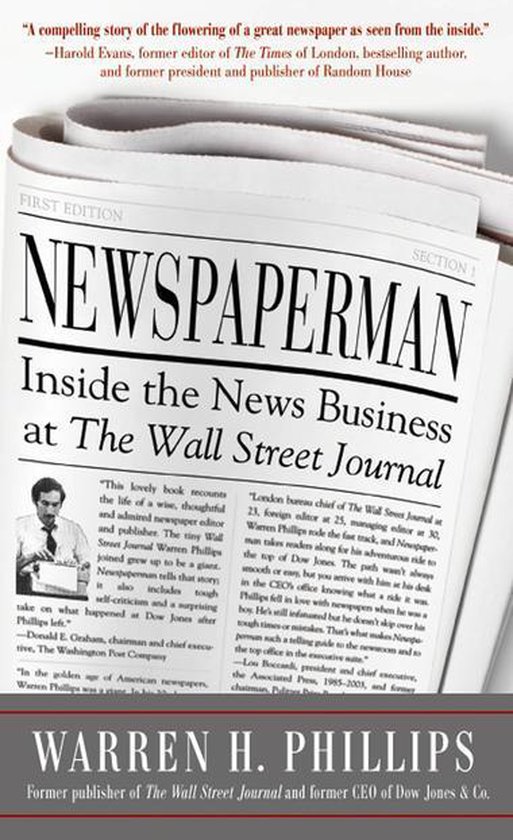 
Newspaperman is at once a fascinating narrative of one man's journey through the newspaper business and an expert analysis of how the news is made. Phillips shows what it's like to be a reporter as history unfolds around him and reveals how editors and publishers debate and decide how the news will be covered.


Starting at the WSJ when it had a circulation of only 100,000, Phillips rose through the ranks, witnessing its rapid expansion to a circulation over two million—the country's highest. Newspaperman illustrates the life of a foreign correspondent, taking readers from Berlin to Belgrade, Athens to Ankara, London to Madrid. It also provides a look into the inner councils of the Pulitzer Prize Board as legendary editors, such as Ben Bradlee of The Washington Post and Clayton Kirkpatrick of The Chicago Tribune, debate journalistic ethics.


Warren H. Phillips began his journalism career as a copy boy at The New York Herald Tribune. He then served The Wall Street Journal as proofreader, copydesk hand, rewriteman, foreign correspondent, foreign editor, and Chicago editor before becoming managing editor at age thirty. He served in that post and as executive editor for thirteen years, and then was the WSJ's publisher and chief executive of its parent company, Dow Jones & Company, for another fifteen years.