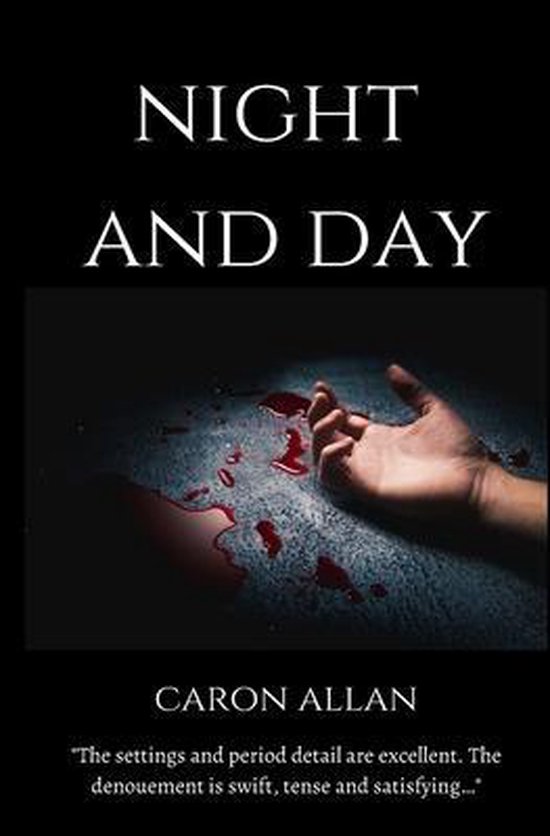 London, November 1933. Dottie Manderson stumbles upon the body of a dying man in a deserted night-time street. As she waits for help to arrive, she holds the mans hand and tries to get him to tell her what happened. But with his last breaths he sings to her some lines from a popular stage show. But why, Dottie wonders? Why would he sing to her instead of sending a final message to his loved ones? Why didnt he name his attacker?Dottie needs to know the answers to these questions and so, even though a particular, very annoying, young policeman is investigating the case officially, she feels compelled to carry out her own investigation into the mysterious death.Introducing a new 1930s female sleuth in a traditional, cozy mystery series set in London between the two world wars, from Caron Allan, the writer of Criss Cross, Cross Check and Check Mate, a diary-based murder not-so-mysterious trilogy set in contemporary Britain.Extract from Night and Day: a Dottie Manderson mystery:If she hurried, she shouldnt get too wet. She had been hopelessly optimistic when she told the cabby the rain had stopped. It hadnt. Dottie drew her fur coat more tightly around her and held onto her hat, now not much more than a bit of limp lace and ribbon. But almost her first step took her an inch deep into a puddle and she couldnt help but give a little yelp at how cold the water was, and the shock of it.Blast it, she grumbled, and leaning against a nearby gate-post, she shook the worst of the water from her silver sandals. Almost new, too, she thought ruefully, and almost certainly ruined. At least her dress hadnt seemed to suffer too badly. She hitched the skirt of it up a little higher and continued her short but eventful journey.A sound came to her ears. A soft shushing sort of sound but almost melodic. She paused a moment. Listened. Her eyes, growing accustomed to the darkness, made out a shape on the pavement not ten yards ahead. Her heart gave an odd lurch, as if a cold hand gripped it.Idiot, she muttered, and forced herself to keep going. She really shouldnt read gothic novels late at night, it made her jumpy. No doubt all she would find were the pages of a newspaper all spread about by the wind, and made to look odd by the streetlamp behind her creating shadows.The sound came again. A little louder, a little more insistent. It sounded almost likeThere was someonea manlying on the pavement. She felt a little shimmer of fear. Could it be a drunk? Perhaps she ought to step into the road, walk round him very carefully, keeping her distanceThe head moved very slightly. His face was a pale oval in the dim lamplight. And she saw that the lips moved too. It was him making that odd noise. So it was a drunk, after all. He was singing to himself in a soft sibilant whisper. Her ear caught the rough melody of it, and even then, just as she saw the blood on his shirt-front, one part of her mind was saying, I know that song.She forgot her fears and ran to his side.What happened? Are you all right? she asked, then berated herself for asking such a stupid question. Because it was all too obvious he was not all right. She knelt beside him and put out a hand to take his groping one.He was quite young, though older than her own nineteen years of age. But no more than perhaps his early thirties. Fairish hair, slightly receding, and dark from the rain. One of those moustaches that were all the rage at the moment. Blue eyes, very blue like a childs, wide and astonished-looking. From his smart evening dress, he was clearly well-to-do, although she didnt recognise him. But the bloodoh the blood. So much
Toon meer Toon minder