Oceania Under Steam Sea Transport and the Cultures of Colonialism, c. 1870-1914 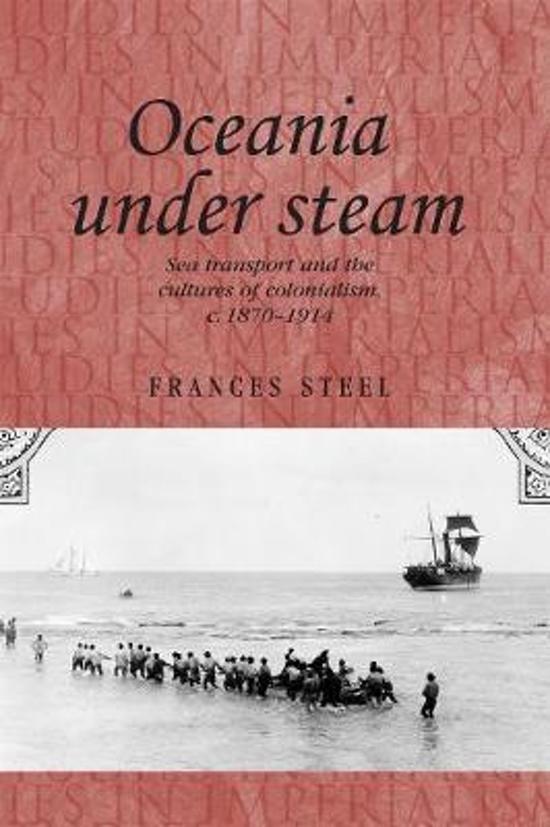 The age of steam was the age of Britain's global maritime dominance, the age of enormous ocean liners and human mastery over the seas. The world seemed to shrink as timetabled shipping mapped out faster, more efficient and more reliable transoceanic networks. But what did this transport revolution look like at the other end of the line, at the edge of empire in the South Pacific? Through the historical example of the largest and most important regional maritime enterprise - the Union Steam Ship Company of New Zealand - Frances Steel eloquently charts the diverse and often conflicting interests, itineraries and experiences of commercial and political elites, common seamen and stewardesses, and Islander dock workers and passengers. Drawing on a variety of sources, including shipping company archives, imperial conference proceedings, diaries, newspapers and photographs, this book will appeal to cultural historians and geographers of British imperialism, scholars of transport and mobility studies, and historians of New Zealand and the Pacific. -- .
Toon meer Toon minder

an important and timely contribution to our understanding of the shared histories of New Zealand and the Pacific in the age of Britain's global maritime dominance 'Frances Steel's Oceania under Steam is an outstanding contribution to the social history of the steamship era. Despite the major archives which exist for the world of steam, and the enormous importance of the steamers and their workforces in creating modernity, the period is still relatively unexplored by social historians.' Jonathan Hyslop, Colgate University, Hamilton, NY, JTH September 2016 'The work is rich in recollections of nautical artefacts and museums, pictures of docksides from Dunedin days, and echoes of the sea and smell of salt. The reader travels almost through a memory lens of the USSCs, analysing steam liners for the ways they developed as emblems of a technological culture, iron transforming the layout of decks, the nautical speed of voyages, and the vision of Pacific travel.' Matt K. Matsuda, Rutgers University, New Brunswick, NJ, USA, International Journal of Maritime History, September 2016 'Her wide and meticulous archival research forms the basis for a maritime history full of people and their human stories, but threaded together by the overarching structures of empire and colonialism. Moreover, she knits the sea and shore together, and shows the ways in which New Zealand and Australia were intricately part of the Pacific, entwined by the routes, vessels, and kinships of maritime trade and the steam industry in particular.' Tracey Banivanua Mar, La Trobe University, Australian Historical Studies, September 2016 'Oceania under Steam's sensitivity to issues of race, gender, class, space, affect, and colonialism makes the book a very important contribution to the growing fields of maritime mobility studies, use-centered history of technology, and sub-imperial citizenship and network scholarship. The book will be of interest to historians of empire, maritime historians, and mobility scholars well beyond experts of the Pacific region.' Heloise Finch-Boyer is Curator of History of Science and Technology at the U.K. National Maritime Museum specializing in the material culture of mobility and empire in the Indian Ocean from the nineteenth to the twenty-first century, Transfers Volume 2 Issue 2 Summer 2012 'This book represents a fantastic example of 'new maritime history' that seeks to understand the crucial place that maritime spaces hold in understanding the complex relationships, whether in terms of power, culture, labour, race or sex, that existed in nineteenth-century maritime empires. While it is an impressive step forward in terms of scholarship, it also highlights how many questions about maritime history remain, and how much there still is to do.' Steven Gray, University of Warwick, The Mariner's Mirror, April 2016 -- .
Toon meer Toon minder