October And Other Poems, With Occasional Verses On The War 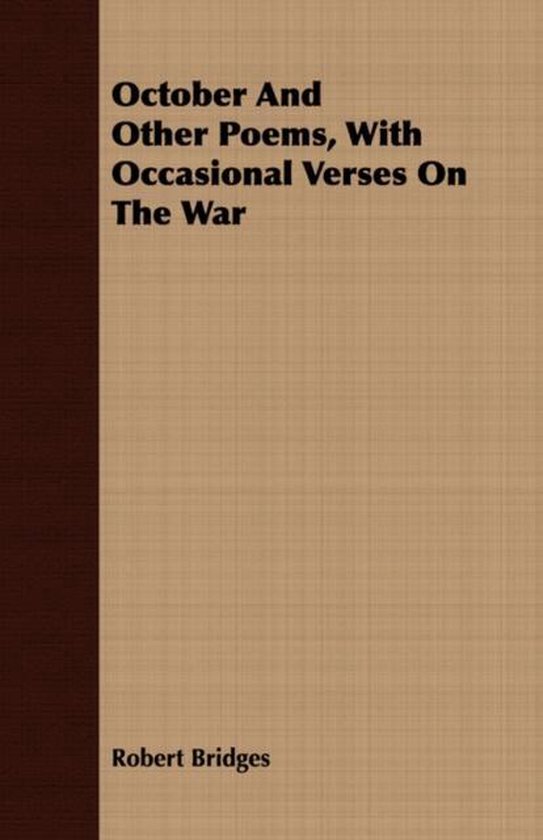 OCTOBER AND OTHER POEMS WITH OCCASIONAL VERSES ON THE WAR -- PREFACE -- Tis miscellaneous volume is composed of three sections. The first twelve poems were written in 1913, and printed privately by Mr. Holmby in 1914. The last of these poems proved to be a war poem, and on that follow eighteen pieces which were called forth 011 occasion during the War, the last being a broadsheet on the surrender of the German ships. All of these verses appeared in some journal or serial. There were a few others, but they are not included in this collection, either because they are lost, or because they show decidedly inferior claims to salvage. lhe last six poems or sonnets are of various dates. - CONTENTS - CHISTMAS EWE, l 7 - - - Io THE PRESIDENT OF TIIE UNITED STATES OF AMERICA 0in PILISONEHS 01 VAN IN GERMANY - HARVEST-HOME - - - - - 10 ALSTRALIA - - - IIIF, ESCELI.EN, I- VAY - - - ENI..NI ro INDIA - - - - - l31t1.1. sI..I VICTRIS - - - - 1 1 11 NF, I, SON AND HE.TT- - - - 1 0 1 - 100 ci11,1 - - - - - - - Itb IEIC.. BI. - - - - 10 H.IIY I., IS LOOI, DRIDE - - - Iortv.tus XIIICI - - - - - DEMOIJTUS - - - - - OCTOBER, APRIL adance in play met with his lover May where she came garlanded. The blossoning boughs oerhcad were thrilld to bursting by the dazzle from the sky and the wild music there that shook the odorous air. Each moment some new birth hastend to deck the earth in the gay sunbeams. Between their kisses dreams . And dream and kiss were rife with laughter of mortal life. But this late day of golden fall is still as a picture upon a wall or a poem in a book lying open uircad. Or whatever else is shrined when the Virgin hath vanishd Footsteps of eternal Mind on the path of the dead. THE FLOWERINGTREE. YIIAT Fairy fannd my dreams while I slept in the sun As if a flowering tree were standing over me Its young stem strong and lithe went brat ching overhead And willowy sprays around fell tasseling to the ground All with wild blossom gay as is the cherry ill Mav When her fresh flaunt of leaf aives crowns of golden green. CI The sunlight was enmeshd in the shifting splendoul- And I saw through on high to soft lakes of blue sky Neer was mortal slumber YO l pt in luxury. 2
Toon meer Toon minder