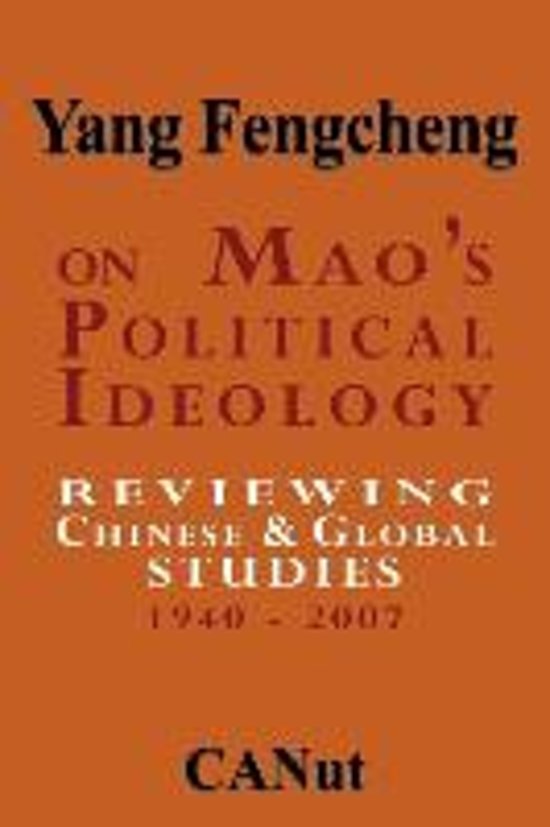 This book is a reference book for students learning Mao Zedong Thought in universities and colleges in China and for theoreticians and researchers studying it in Party schools, theoretical publicity bodies and academic research institutes from Mainland China. It offers an objective, equitable, and comprehensive introduction and assessments on the past and latest achievements in the study of Mao Zedong Thought in China and foreign countries and on the controversial issues in the study. When deciding on the English edition of this book, we have aimed to deliver the global reader a complete picture on how Mao Zedong and Mao Zedong's ideology is evaluated and studied in today's China. It is a representative book of its kind and also reflects how the mainland Chinese scholars have evaluated foreign studies on Mao Zedong. Thus we hope the book will encourage more exchanges on Mao Zedong studies worldwide. The book also offers a comprehensive and systematic study material and factual information for those interested in the history of Marxism in China. The book was written by a team work and young and middle-aged scholars teaching and studying Mao Zedong Thought and the history of the Communist Party of China at the Department of History of the Communist Party of China in Renmin University of China, have contributed to it. Mao Zedong one of the most charismatic Marxist political leaders of the world, has affected the path of China, region and the world. As a large country with an unimaginable population China had been an important object of world politics, then it became a subject acting for itself this was mainly initiated by two persons and two parties, Sun-Yat-Sen and KMT; Mao and CPC. But, Sun-Yat-Sen was an unfortunate man, he could not see his ideals being realized for his people and country and the party he had established -KMT remains as one of the capitalist ruling parties in Taiwan Island. Mao Zedong could also not see all what he desired. The Cultural Revolution had proceeded in a totally different direction. Some of his ideals would not fit the practice of today's Chinese socialism. Yang Fengcheng, the compiler of this comprehensive book offers enough evidence that studies in China over Mao Zedong himself and his ideology has remarkably improved and being institutionalized after that evaluation and in 1990s. Yang Fengcheng and his colleagues have presented a large catalogue of new research findings and debates among scholars and experts studying in this sphere. These abundant and thought provoking materials surely offer a broad vision for a wide range of related people including scholars, politicians and activists. It will be impossible to understand today's and future China without understanding Mao Zedong and the CPC. Mao Zedong had made the deepest effect in China's life and readers may find solid evidence that this will be valid for a long time to come. Mao Zedong, was the first man who had seen the major future trend of socialist movement in the world, that it should be firmly rooted in a country's soil and integrated with the people's practice in that country. But this new idea in a certain period of time in the history had caused a big turbulence and sharp conflicts in the socialist movement and was of a great political significance. Being a part of the conflict hurts every side and confuses people and sometimes conflicts become unavoidable. The book also offers some material how this issue was later evaluated and reviewed and set in the right direction by the CPC. Study of main trends, ideas and leaders are important component of country studies. As the root ideology of China's Marxism, which leads the country, the new trends in Mao Zedong Thought studies will remain to be important. This book offers a rare opportunity, as it is the first English published book by authoritative Chinese authors on this subject with the newest information.
Toon meer Toon minder