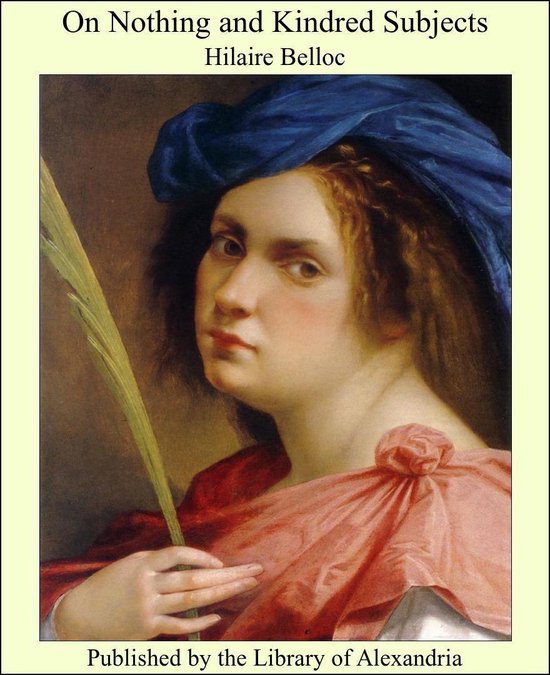 On Nothing & Kindred Subjects King's Land, December the 13th, 1907 My dear Maurice, It was in Normandy, you will remember, and in the heat of the year, when the birds were silent in the trees and the apples nearly ripe, with the sun above us already of a stronger kind, and a somnolence within and without, that it was determined among us (the jolly company!) that I should write upon Nothing, and upon all that is cognate to Nothing, a task not yet attempted since the Beginning of the World. Now when the matter was begun and the subject nearly approached, I saw more clearly that this writing upon Nothing might be very grave, and as I looked at it in every way the difficulties of my adventure appalled me, nor am I certain that I have overcome them all. But I had promised you that I would proceed, and so I did, in spite of my doubts and terrors. For first I perceived that in writing upon this matter I was in peril of offending the privilege of Others, and of those especially who are powerful to-day, since I would be discussing things very dear and domestic to my fellow-men, such as The Honour of Politicians, The Tact of Great Ladies, The Wealth of Journalists, The Enthusiasm of Gentlemen, and the Wit of Bankers. All that is most intimate and dearest to the men that make our time, all that they would most defend from the vulgar gaze,—this it was proposed to make the theme of a common book. In spite of such natural fear and of interests so powerful to detain me, I have completed my task, and I will confess that as it grew it enthralled me. There is in Nothing something so majestic and so high that it is a fascination and spell to regard it. Is it not that which Mankind, after the great effort of life, at last attains, and that which alone can satisfy Mankind's desire? Is it not that which is the end of so many generations of analysis, the final word of Philosophy, and the goal of the search for reality? Is it not the very matter of our modern creed in which the great spirits of our time repose, and is it not, as it were, the culmination of their intelligence? It is indeed the sum and meaning of all around

Originele Titel
On Nothing and Kindred Subjects