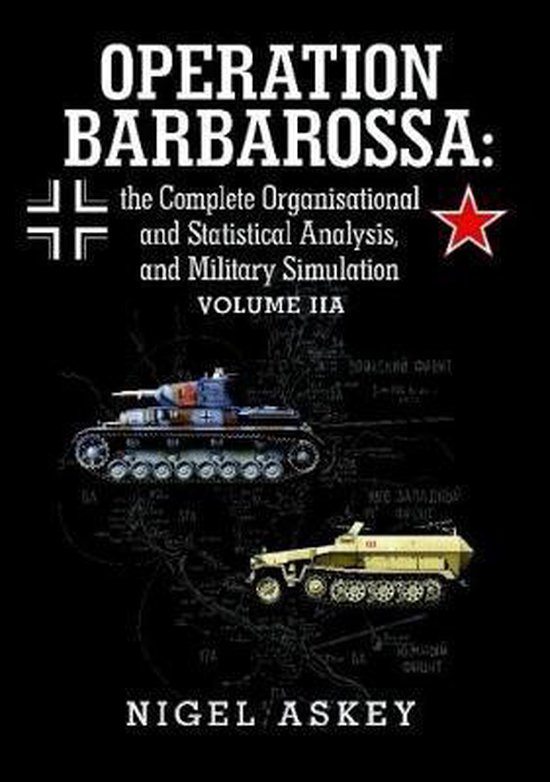 In June 1941 the German Wehrmacht launched Operation Barbarossa: the attack on the USSR and the largest land invasion in recorded history. The titanic battles that followed led to the greatest loss of life ever experienced in a military campaign. Since the end of WWII there has been intense discourse about the key operational and strategic decisions made by the German and Soviet high commands on the East-Front, especially during the critical period from July to September 1941.


Operation Barbarossa: the Complete Organisational and Statistical Analysis, and Military Simulation focuses on 1941 - when the USSR came closest to defeat. It includes full analyses of the belligerents' armed forces, weapons, equipment, personnel, transport, logistics, war-production, mobilisation and replacements. Uniquely, the work formalises a sophisticated military simulation methodology extending from the tactical to the strategic level, and applies this methodology to each of the belligerents. Volume I, the first of six volumes, is primarily concerned with the structure of this methodology, but uses many of the events and weapons from Operation Barbarossa as illustrative case studies. The complete work represents the most historically accurate, advanced and comprehensive quantitative analysis yet, of the 1941 campaign on the East-Front.


Operation Barbarossa: the Complete Organisational and Statistical Analysis, and Military Simulation is the culmination of over ten years of research and collation. It brings together an immense amount of information from many published and unpublished sources, and presents it with contextual history and analyses. The professional researcher or amateur scholar of WWII is provided with a comprehensive data source, containing the details of all the armed forces involved on the East-Front during 1941, as well as the relevant economic and logistical support. Currently no other single work provides a comparable reference of the actual Soviet and Axis land, air and naval forces involved in what was the most decisive and destructive campaign of WWII.