Panentheism Addressing Creation from the Void 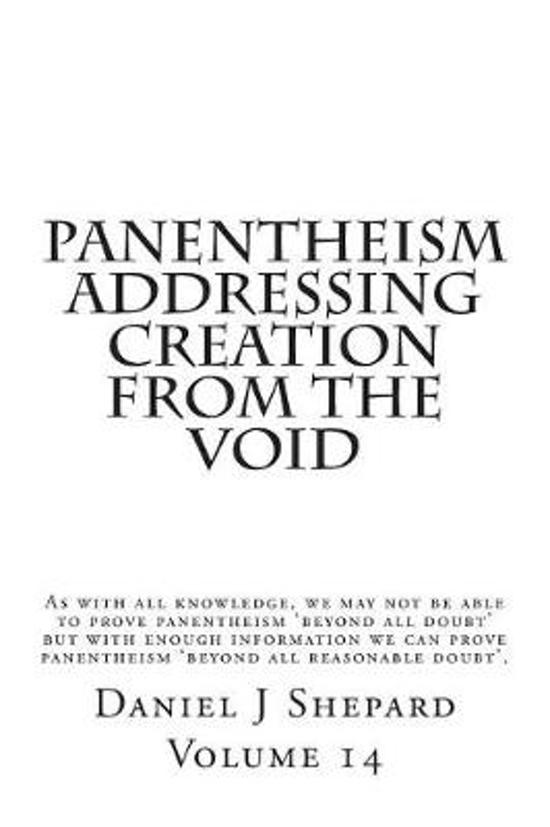 The concept of a true void, nothingness, simply existing took thousands of years to be accepted in the West as well as the East. Strangely enough, the void is still not understood as being ‘something’ as opposed to existing as nothing. Paradoxically the void is ‘nothing’ and for that very reason it is, it exists, it is ‘something’. Nothing is nothing. The void is the lack of matter, the lack of energy, the lack of space-time, the lack of God, the lack of any ‘thing’ as well as the lack of any ‘abstraction’. ... Understanding the concept of ‘nothingness’, a perfect void being ‘something’ while simultaneously being what it is, nothingness, is a fairly new concept and as such the discussion of such a topic will seem alien at first glance.The void, nothingness, is a concept of our perceptions and as such nothingness is abstract in nature. Existence of abstraction is not an uncommon occurrence. There are many abstractions, which are purely abstract versus abstractions, which are abstract perceptions of the physical. An example of a pure abstraction is a ‘point’. A geometric point is a location of no size and incorporating no time. Although a point technically does not exist, the whole field of geometry is built upon this elusive abstraction. Without the concept of a point, geometry would not exist. In fact, without the concept of the abstract, non-existent point, physics itself would not exist.The metaphysician deals with what comes before zero and after infinity. The physicists and mathematicians deal with what lies between zero and infinity. ...The movement ‘towards’ and understanding of the ‘limit’ zero in turn leads us ‘towards’ understanding what happens to the physical when the physical becomes ‘zero’. In addition to not having examined zero-ness itself, Western mathematics has not looked in the other direction and examined infinite-ness itself. Western mathematics has not examined what happens as we move ‘out’ infinitely far beyond the endlessness of expansion. Western mathematics has not examined the totality of time and timelessness, has not examined the summation of time and timelessness.This volume leads to an understanding of ‘nothingness’, an understanding of how it is nothingness, something which does not exist, not only exists but exists dramatically in a dynamic active state upon which both the individual – individuality and God – the Whole, depend for their very existence.The process of understanding ‘nothingness’ existing in the ‘active’ state versus a ‘passive’ state requires an understanding of the actual limit of zero-ness/nothingness itself. ...It is Metaphysics, a subset of philosophy, which will lead the way towards understanding the functionality of zero, infinity, and nothingness.The demise of metaphysics has become starkly apparent beginning with the nineteenth century and culminating in the twentieth centuries. The shambles of metaphysics is so apparent its absence was noted by one of the great cosmologists of the twentieth century when he stated:''However, in the nineteenth and twentieth centuries, science became too technical and mathematical for the philosophers, or anyone else except a few specialists. Philosophers reduced the scope of their inquiries so much that Wittgenstein, the most famous philosopher of the century, said, “The sole remaining task for philosophy is the analysis of language.What a come down from the tradition of philosophy from Aristotle to Kant!''Steven Hawking – A Brief History of TimeBut it is not the technicality of science, which has caused philosophy to draw up short of its objective and hesitate. It is the understanding of the concept of the existence and functionality of nothingness which this volume addresses in detail.
Toon meer Toon minder