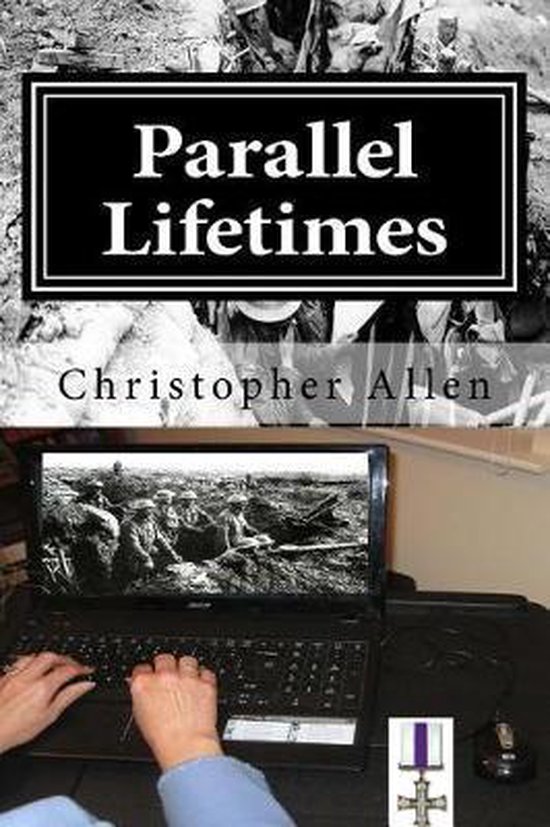 ‘Parallel Lifetimes’ is a work of crime fiction. However, for reasons of authenticity, great care has been taken to ensure technical, geographical and historical accuracy throughout. This most especially applies to those parts of the narrative set in the time period of the First World War. Imaginary characters have been inserted in the actual events that occurred during the extraordinary campaign conducted in different sectors of the Western Front by the 2nd Battalion of the Devonshire Regiment and the 2nd Battalion of Middlesex Regiment, each with 23rd Brigade under the 8th Division of the British Army. Much of the action contained in this book is based—wherever possible—on eye witness accounts wherein only the identity of the real participants has been changed. For plot development reasons, some action sequences have been invented such as the Middlesex two company raid—based on that actually carried out by the Australian 3rd Division—prior to the beginning of the German spring offensive on the morning of Thursday, March 21st 1918. The author wishes to apologise for any errors in points of detail that—given the passage of time since the Great War—have almost certainly crept into the story in the hope that it does not detract from the reader’s enjoyment. For dramatic purposes, some of the fictional characters depicted in ‘Parallel Lifetimes’ as holding command positions are highly disreputable in nature. This is in no way intended to cause offence or to impugn the honour of any of the regiments or actual participants on either side caught up in a conflict, the horror of which is scarcely imaginable to the modern mind. Regrettably, it is a matter of well documented fact that great hatred, contempt and distrust existed in other ranks towards some—but by no means all—British Army Staff Officers throughout the course of the Great War. Therefore it seems reasonable to infer that—in extreme cases—such animosity would have provided ample ground and motivation for the crime of murder and a credible premise from which to base this story. Furthermore, research suggests that such a terrible conflict inevitably brought out not only the best but also the worse that the human race has to offer. Page 4 The stand of the Second Battalion of the Devonshire at the Bois des Buttes, regarded as one of the most outstanding unit actions of the Great War, is based on regimental on-line archive material. As depicted in this fictional account, it includes the names of some of the actual participants simply in order to honour them. Synopsis In May 1918, Captain Christian Braithwaite faces a grim battle for survival as his division—following its mauling whilst resisting the initial stages of the all-out German spring offensive in March of that year—is transferred south to a supposedly quiet section of the French Front at Chemin-Des-Dames. The Allied High Command, despite repeated warnings, remains unconvinced that this is the very sector in which the enemy will strike next with overwhelming force. As a result of a head injury, Braithwaite—a dangerous man when cornered—has been gifted with precognitive insights. But can even he survive the coming cataclysmic clash of arms when his own commanding officer—a ruthless careerist, covetous of his fiancée: Catherine—would prefer him dead? In May 2015—based in Yeovil, Somerset—wealthy heir and Hypnotherapist: Timothy Trevelyan faces a practitioner’s worse nightmare when he is accused of rape by an attractive married client—Jessica Cassidy—with whom he has foolishly entered an affair. Can he survive ruin and imprisonment when the evidence—although contrived—against him is so seemingly overwhelming? Trevelyan is taken to the limit of his endurance and ingenuity as he attempts to fend off the well-orchestrated campaign of fraud waged against him. What links both men as they struggle for personal and professional salvation across such a span of time?
Toon meer Toon minder