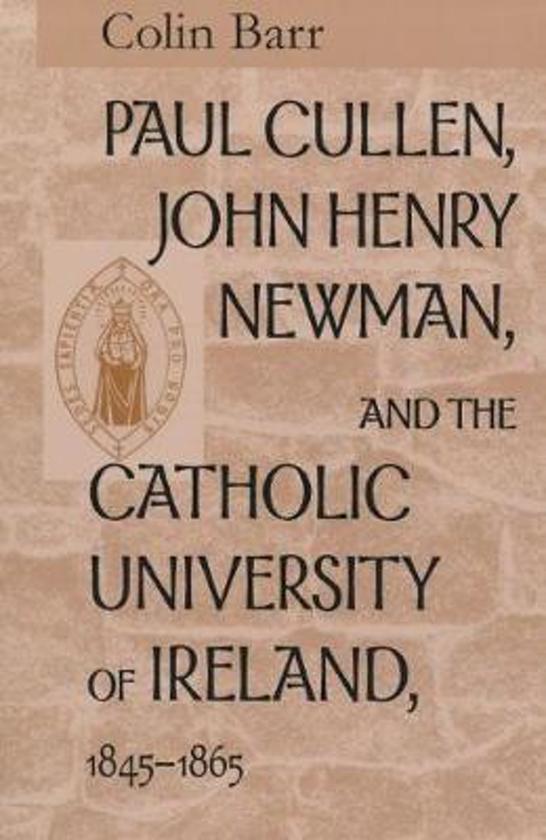 The history of the Catholic University of Ireland has been overshadowed by its first rector, John Henry Newman. This work paints a portrait of CUI's history by focusing on the university itself and on the influence of Paul Cullen, archbishop of Armagh and then Dublin. Most historians have based their treatments of the CUI on Newman's correspondence and writings, and have tended to accept Newman's understanding of his role in Dublin and his relationship with Cullen - creative visionary, frustrated at every turn by the obscurantist, ultra-montane Cullen. This work restores Cullen's role in the founding and history of the University using previously unavailable sources and by relocating the history of the Catholic University in its Irish context.

Barr's work convincingly revises readers' understanding of the formation of the Catholic University of Ireland, giving Cullen credit for his stewardship of what traditionally has been labeled Newman's University. Colin Barr has written an outstanding book, essential reading for scholars and advanced students interested in the Catholic Church and higher education in nineteenth-century Ireland. --History: Reviews of New Books Colin Barr has written a most judicious and illuminating history of the Catholic University of Ireland and the roles played by Archbishop Cullen and Newman in its founding and failure. --Journal of Ecclesiastical History Colin Barr's well-researched study... offers real insight... into an often-overlooked period of Irish history. Barr's book is useful and evenhanded history, well organized, clearly presented, and based on wide-ranging research. --Journal of Modern History Barr has revisited the history of the university, making use of numerous sources which have only been opened to scholars in recent years. This enables Barr to re-draw the portrait often painted of Cullen as obscurantist and Newman as incompetent administrator and to provide a more balanced assessment of the efforts of both men to found CUI--a worthy project which the conditions of the time doomed to failure. --Catholic Library World This is an excellent book, based on careful and detailed inquiry. Though derived from a thesis, it is written with clarity and fluency. It tells a new story, or rather is an example of historical revisionism at its best, with an new and more truthful story emerging to replace the old and tendentious one. To everyone interested in in both the history of Irish education, and the complexities of Ireland in the 19th century, Barr's book will be of immense interest and value. --Irish Catholic This is a fine and impressive piece of work that makes an original contribution to nineteenth-century Irish history generally and to Irish education specifically. It will be welcomed by scholars who seek information about this important episode of Irish history. --Senia Paseta, St. Hugh's College, Oxford University ...a marvelous and sometimes surprising picture of Newman's work in the context of Irish higher education. Those wanting a careful and judicious explanation of a legendary relationship of two highly talented cleric-educators in the atmosphere of the midnineteenth-century Irish Catholic Church will find a full reading well rewarded. --History of Education Quarterly . . . grounded in a deep, critical reading of original archival and contemporary printed sources . . . Barr's study breaks new ground. . . . He has written history as a serious archival scholar should write it. He has brought new sources and information to bear on his subject, and both Irish historical study and Newman scholarship stand in his debt. --Victorian Studies
Toon meer Toon minder