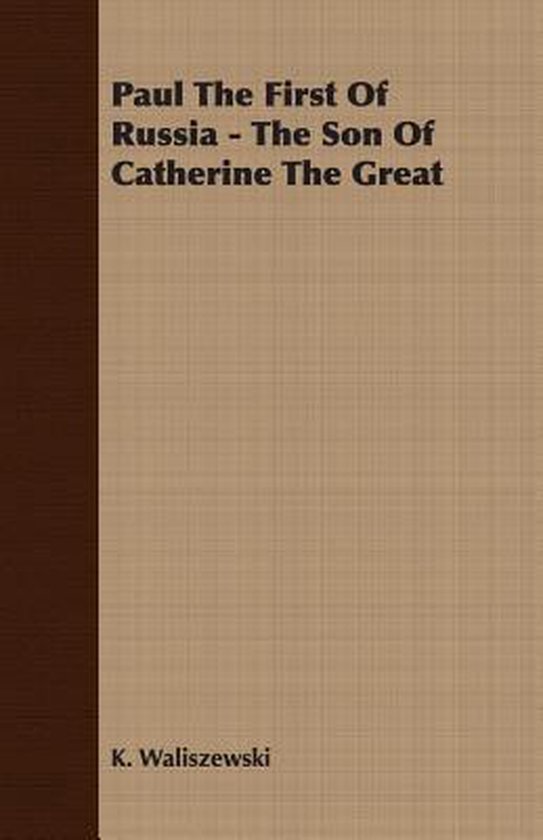 PAUL THE FIRST OF RUSSIA i ft t f ft f y f t tt t PAUL THE FIRST OF RUSSIA, THE SON OF CATHERINE THE GREAT BY K. WALISZEWSKI WITH A PORTRAIT P II TLA DELPHI A J. B. LIPPINCOTT COMPANY LONDON WILLIAM HEINEMANN MCMXIII INTRODUCTION THE tragic figure of the son of Catherine the Great Is one of the most enigmatic in history, and also one of the most discussed. Mad monarchs have been common enough, and in the second half of the eighteenth century such an affliction hardly called for remark. George 111 in England and Christian VII in Denmark were the contemporaries of the Czar 3Paul whose case however presents some special features. In the first place was Catherines son really mad Till lately it seemed to be admitted that he was so, at any rate in the last years of his life. The events of his reign of nearly four years were unanimously regarded as the grotesque and disastrous result of the uncontrolled caprice of a demented tyrant. All this is now contested, and in the last few years there has been a complete reversal of the received opinions both of Pauls character and intellect and of the value of his work. The progress of science, both medical and historical, has made it necessary to revise to some extent views formerly accepted, but the reaction has been carried to extremes. In the eyes of his most recent Russian biographers Paul is riot merely not a lunatic he has become almost a man. They arc not content to celebrate his great qualities and his brilliant talents they incline to think that he had genius, reign, far from having been a scries of cruel misfortunes for Ms subjects, as used to be supposed, was in the opinion of these historians a period of beneficent activity and developmentwhich, had it not been cut short by the death INTRODUCTION of the sovereign, might have been the beginning of un exampled prosperity and greatness. How is it that we have deceived ourselves so long and so grossly How was it that Pauls own mother shared the common delusion to such an extent that she did all she could to exclude him from the throne Moreover., if he is really worthy of the place in the Pantheon ol great sovereigns which is assigned to him by his new apologists, how do they reconcile this historic eminence with the eccentricities of his mind and character whieh they do not deny, and with the calamities which they admit wc re the consequences of his government-All this gives a new aspect to the problem the following pages may help to indicate a solution Minute as the investigations of Pauls intellectual and temperamental evolution have been, all the factors have not been taken into account. Influences of even moment than heredity, education and environment have escaped the notice of the inquiries It is a plausible supposition, but not an ascertained fact, his reputed father Peter III was really the author of lib Thus the theory of congenital Is no sound basis for argument He to the of his mother and for twenty he hin in violently attacking a polity a with all its faults gave Russia a power a which she has not since recovered. plotted and prepared the overthrow of when he came to the throne he at to carry out his design. Entangled for a in tint anti-revolutionary league he left alliance In tin join hands with the hero of the 18th and to a shaxe with him in the destruction of the dc cif tMngs in Europe and in the of the To does all this point if not to a and with the mob of 2
Toon meer Toon minder