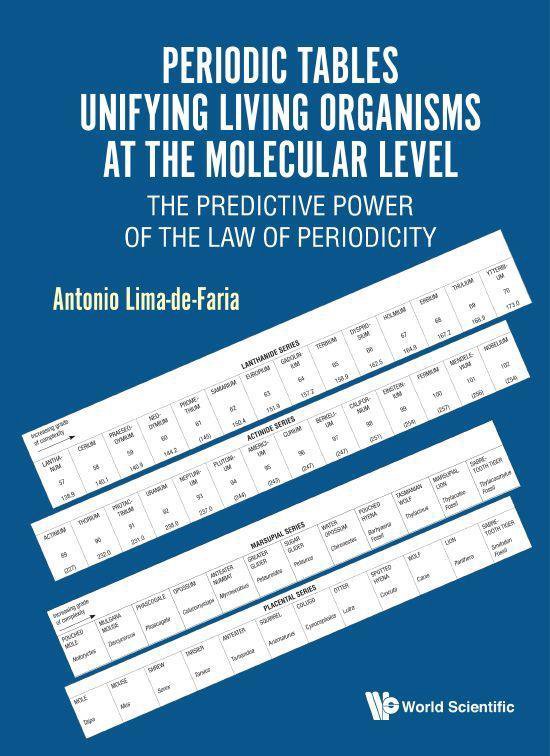 The DNA sequencing of a series of living organisms has elucidated many biological problems. But the internal atomic and electronic evolution of DNA remains to be mapped in detail. RNA and DNA now appear to be the prime determinants of biological evolution leading to the sudden appearance of novel organism structures and functions that emerge 'ready made' as a surprise to the organism. This has been demonstrated by the manipulation of genes that led to the sudden production of additional complete wings and legs in flies and birds. The study of this internal atomic construction of macromolecules is being investigated at the large electron accelerators such as the MAX IV Synchrotron Radiation Laboratory, Lund University, Sweden.The periodicity of the chemical elements is well known from its iconic Table. Significantly, this periodicity can now be seen to extend to the properties of living organisms. Biological properties as different as: flight, vision, luminescence and regeneration, as well as others, show unexpectedly periodic emergence. They resurface, without previous announcement, in most unrelated plant and animal families and they emerge irrespective of whether the organism is a simple invertebrate or a most complex mammal.Moreover, this periodicity does not necessarily start at the cell or DNA levels but appears initially in crystals and minerals, where it is shown to be a pure atomic and electronic process, e.g. in luminescence and regeneration.The assembled molecular evidence led to the construction of Periodic Tables of living organisms, placing them in a position comparable to the periodicity of the chemical elements. Surprisingly, there are striking resemblances between the periodicities of the chemical elements and those of living organisms. In addition, the two types of Tables increase our insight into the events directing atomic evolution since the periodic law established in chemical elements turns out to be applicable to the periodicity of living organisms. The new Periodic Tables introduce a predictive capacity in biological evolution that before was hardly contemplated.Eric Scerri, from the Department of Chemistry and Biochemistry, California University, Los Angeles, who is the Author of the book 'The Periodic Table. Its Story and its Significance', Oxford University Press, stated in an e-mail that 'Professor Lima-de-Faria's book is wonderful and a pioneering work'.