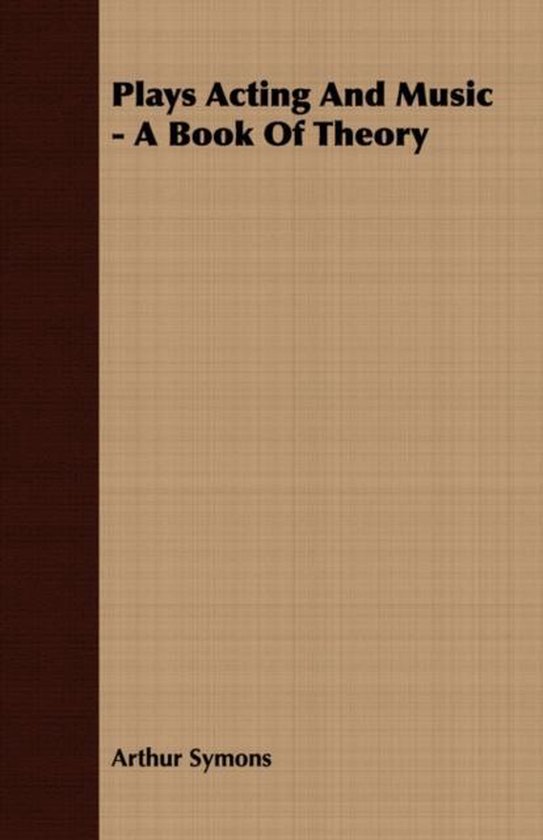 PLAYS, ACTING, AND MUSIC PLAYS ACTING AND MUSIC A BOOK OF THEORY BY ARTHUR SYMONS LONDON CONSTABLE COMPANY LTD 1909 COPYRIGHT 1909, BY CONSTABLE COMPANY, LTD. To Maurice Maeterlinck in friendship and admiration PREFACE When this book was first published it con tained a large amount of material which is now taken out of it additions have been made, besides many corrections and changes and the whole form of the book has been remodelled. It is now more what it ought to, have been from the first what I saw, from the moment of its publication, that it ought to have been a book of theory. The rather formal announcement of my intentions which I made in my preface is reprinted here, because, at all events, the programme was carried out. This book, I said then, is intended to form part of a series, on which I have been en gaged for many years. I am gradually working my way towards the concrete ex pression of a theory, or system of aesthetics, of all the arts. In my book on The Symbolist Move vii Plays, Acting, and Music ment in Literature I made a first attempt to deal in this way with literature other vol umes, now in preparation, are to follow. The present volume deals mainly with the stage, and, secondarily, with music it is to be fol lowed by a volume called Studies in Seven Arts in which music will be dealt with in greater detail, side by side with paint ing, sculpture, architecture, handicraft, dancing, and the various arts of the stage. And, as life too is a form of art, and the visible world the chief storehouse of beauty, I try to indulge my curiosity by the study of places and of people. A book on Cities is now in the press, and a book of imaginary portraits 5 is to follow, under thetitle of Spiritual Adventures Side by side with these studies in the arts I have my own art, that of verse, which is, after all, my chief concern. In all my critical and theoretical writing I wish to be as little abstract as possible, and to study first principles, not so much as they exist in the brain of the theorist, but as they may be discovered, alive and in viii Plays, Acting, and Music effective action, in every achieved form of art, I do not understand the limitation by which so many writers on aesthetics choose to confine themselves to the study of artis tic principles as they are seen in this or that separate form of art. Each art has its own laws, its own capacities, its own limits these it is the business of the critic jealously to distinguish. Yet in the study of art as art, it should be his endeavour to master the universal science of beauty. 1903, 1907. CONTENTS INTBODTJCTIOlSr PAG 13 An Apology for Puppets . 3 PLAYS AND ACTING Nietzsche on Tragedy .... 11 Sarah Bernhardt ....... 17 Coquelin and Moliere 29 Rejane 37 Yvette Guilbert 42 Sir Henry Irving 52 Duse in Some of Her Parts . ., 60 Annotations ....... 77 M. Capus in England. ... 93 A Double Enigma . .... 100 BEAMA Professional and Unprofessional . 109 Tolstoi and Others 115 Some Problem Plays .
Toon meer Toon minder