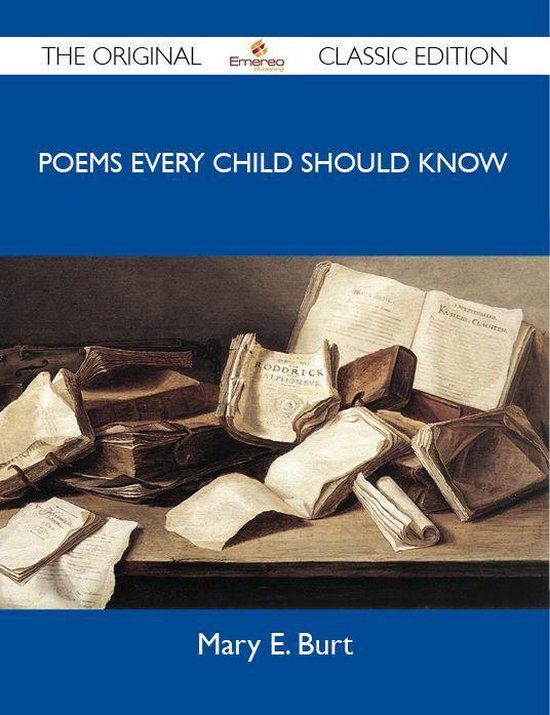 Is this another collection of stupid poems that children cannot use? Will they look hopelessly through this volume for poems that suit them? Will they say despairingly, This is too long, and That is too hard, and I dont like that because it is not interesting?


Are there three or four pleasing poems and are all the rest put in to fill up the book? Nay, verily! The poems in this collection are those that children love. With the exception of seven, they are short enough for children to commit to memory without wearying themselves or losing interest in the poem. If one boy learns The Overland Mail, or The Recruit, or Wynken, Blynken, and Nod, or The Song in Camp, or Old Ironsides, or I Have a Little Shadow, or The Tournament, or The Duel, nine boys out of ten will be eager to follow him. I know because I have tried it a dozen times. It is often better to divide a long poem among the children, letting each child learn a part. The sustained interest of a long poem is worth while. The Merman, The Battle of Ivry, Horatius at the Bridge, Krinken, The Skeleton in Armour, The Raven and Hervé Riel may all profitably be learned that way. Nevertheless, the child enjoys most the poem that is just long enough, and there is much to be said in favour of the selection that is adapted, in length, to the average mind; for the child hesitates in the presence of quantity rather than in the presence of subtle thought. I make claim for this collection that it is made up of poems that the majority of children will learn of their own free will. There are people who believe that in the matter of learning poetry there is no ought, but this is a false belief. There is a duty, even there; for every American citizen ought to know the great national songs that keep alive the spirit of patriotism. Children should build for their future-and get, while they are children, what only the fresh imagination of the child can assimilate.


They should store up an untold wealth of heroic sentiment; they should acquire the habit of carrying a literary quality in their conversation; they should carry a heart full of the fresh and delightful associations and memories, connected with poetry hours to brighten mature years. They should develop their memories while they have memories to develop.


Will the boy who took every poetry hour for a whole school year to learn Henry of Navarre ever regret it, or will the children who listened to it? No. It was fresh every week and they brought fresh interest in listening. The boy will always love it because he used to love it. There were boys who scrambled for the right to recite The Tournament, The Charge of the Light Brigade, The Star-Spangled Banner, and so on. The boy who was first to reach the front had the privilege. The triumph of getting the chance to recite added to the zest of it. Will they ever forget it?


I know Lowells The Finding of the Lyre. Attention, Sir Knights! See who can learn it first as I say it to you. But I find that I have forgotten a line of it, so you may open your books and teach it to me. Now, I can recite every word of it. How much of it can you repeat from memory? One boy can say it all. Nearly every child has learned the most of it. Now, it will be easy for you to learn it alone. And Memory, the Goddess Beautiful, will henceforth go with you to recall this happy hour.