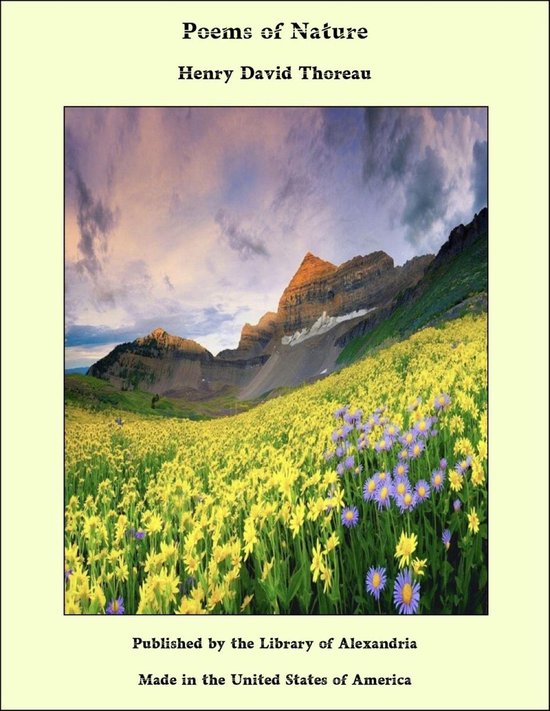 Henry David Thoreau (July 12, 1817 - May 6, 1862) was born in Concord Massachusetts and educated at Harvard. He became a follower and a friend of Emerson, and described himself as a mystic and a transcendentalist. Although he published only two books in his lifetime, Walden is regarded as a literary masterpiece and one of the most significant books of the 19th century.

The fifty poems here brought together under the title ‘Poems of Nature’ are perhaps two-thirds of those which Thoreau preserved. Many of them were printed by him, in whole or in part, among his early contributions to Emerson’s Dial, or in his own two volumes, The Week and Walden, which were all that were issued in his lifetime. Others were given to Mr. Sanborn for publication, by Sophia Thoreau, the year after her brother’s death (several appeared in the Boston Commonwealth in 1863); or have been furnished from time to time by Mr. Blake, his literary executor. Most of Thoreau’s poems were composed early in his life, before his twenty-sixth year, ‘Just now’ he wrote in the autumn of 1841, ‘I am in the mid-sea of verses, and they actually rustle round me, as the leaves would round the head of Autumnus himself, should he thrust it up through some vales which I know; but, alas! many of them are but crisped and yellow leaves like his, I fear, and will deserve no better fate than to make mould for new harvests.’ After 1843 he seems to have written but few poems, and had destroyed perhaps as many as he had retained, because they did not meet the exacting requirements of his friend Emerson, upon whose opinion at that time he placed great reliance. This loss was regretted by Thoreau in after years, when the poetical habit had left him, for he fancied that some of the verses were better than his friend had supposed. But Emerson, who seldom changed his mind, adhered to his verdict, and while praising some of the poems highly, perhaps extravagantly, would admit but a small number of them to the slight selection which he appended to the posthumous edition of Thoreau’s Letters, edited by him in 1865; and even these were printed, in some instances, in an abbreviated and imperfect form. A few other poems, with some translations from the Greek, have lately been included by Thoreau’s Boston publishers in their volume of Miscellanies (vol. x. of the Riverside Edition, 1894). But no collection so full as the present one has ever been offered to the public. It has not been attempted to make this a complete collection of Thoreau’s poems, because, as has been well said, ‘many of them seem to be merely pendants to his prose discourse, dropped in as forcible epigrams where they are brief, and in other instances made ancillary to the idea just expressed, or to perpetuate a distinct conception that has some vital connection with the point from which it was poured forth. It is, therefore, almost an injustice to treat them separately at all.’ After the discontinuance ofThe Dial, Thoreau ceased to publish his verses as separate poems, but interpolated them, in the manner described, in his prose essays, where they form a sort of accompaniment to the thought, and from which it is in many cases impossible to detach them. That he himself set some value on them in this connection may be gathered from a sentence in the last of his published letters, in which he writes to a correspondent: ‘I am pleased when you say that in The Week you like especially those little snatches of poetry interspersed through the book, for these I suppose are the least attractive to most readers.’