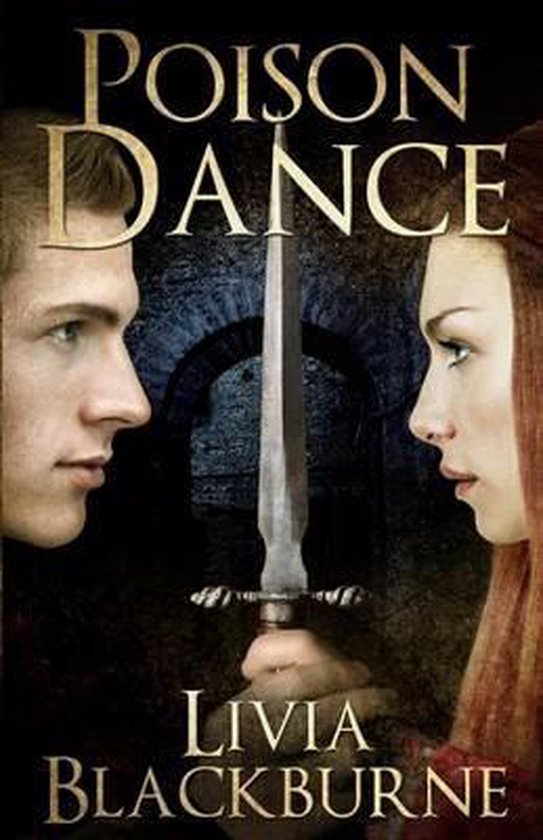 James is skilled, efficient, and deadly, a hired blade navigating the shifting alliances of a deteriorating Assassin's Guild. Then he meets Thalia, an alluring but troubled dancing girl who offers him a way out—if he'll help her kill a powerful nobleman. With the Guild falling apart, it just might be worth the risk. But when you live, breathe, and love in a world that's forever flirting with death, the slightest misstep can be poison.


He handed her a stiletto the length of her hand and molded her fingers around the handle. Her hands were slender and her nails were delicately rounded, though her palms were calloused. The two of them stood in the cramped space between his bed and the window, holding the blade between them.


"You can wear this dagger under your sleeves. Then, when you get your chance . . ." James guided the knife toward his own throat. "Go for the neck—the blood vessels and the windpipe. You'll have to be close for that. Quick."


He lowered the stiletto until its tip grazed his neck just above his collarbone. Her eyes widened, and she looked to his face.


He smiled and tightened his hands around her wrist. "Never let your guard down. Never trust anyone, and never leave yourself vulnerable."


"What if I'd surprised you just now? I could have been sent by someone to kill you."


She arched her eyebrow. "I wouldn't have killed you?"


"You wouldn't have surprised me." He continued. "You have to be aware. If someone is this close to you, holding a weapon, you need to be on your guard. I'm watching your eyes, your shoulders. I'm aware of how you're standing, where your balance is. If you tighten your muscles to strike, I'll feel it in your arm. You should be doing the same with me."


Her eyes were cautious as she took in what he said. And he watched her look down, taking in his arms, the angle of his chest. Her gaze went inward and her lips fell slightly open as she tried to get a feel for his balance. Standing as close as they were, he could smell a light perfume on her skin.


Thalia seemed to remember herself. She disengaged her wrist and backed away.


"What makes a lass like you into a killer?" he asked.


She shot him an annoyed look, and the tension left the room. "I didn't hire you to delve into my past."


"Are you sure you want to do this? It changes you, you know, your first kill."


A smile touched her lips, a hint of a challenge. "You're quite determined to have me think this over. Do you regret your first kill?"


It was an interesting question, and he gave it some thought. "No," he finally said. "I regret not having done it sooner."


"Who was it?" She tilted her head in anticipation of a tale. "Some Red Shield?"


"My father." He smiled when her eyes widened. "I'll make you a deal. You can keep your secrets, and I'll keep mine."


"Fair enough." In another moment, she was all business again. "So if I want to cut his throat, I have to get in close to him."


He shrugged. "And you never will be. But I killed grown men before I came of age. If you can't rely on strength, you rely on stealth. Surprise is your strongest asset, so make sure the first time kills." He paused. "If you kill him while he's alone, you might be able to escape. If there are others with him, you won't. Either way, you're just as likely to die from this venture as your mark. You know that, right?"


Her voice was level, but he thought he caught a flash of despair in her eyes. What secrets was she holding that would drive her to do this? But that was her business.
Toon meer Toon minder