Population Ageing - A Threat to the Welfare State? The Case of Sweden 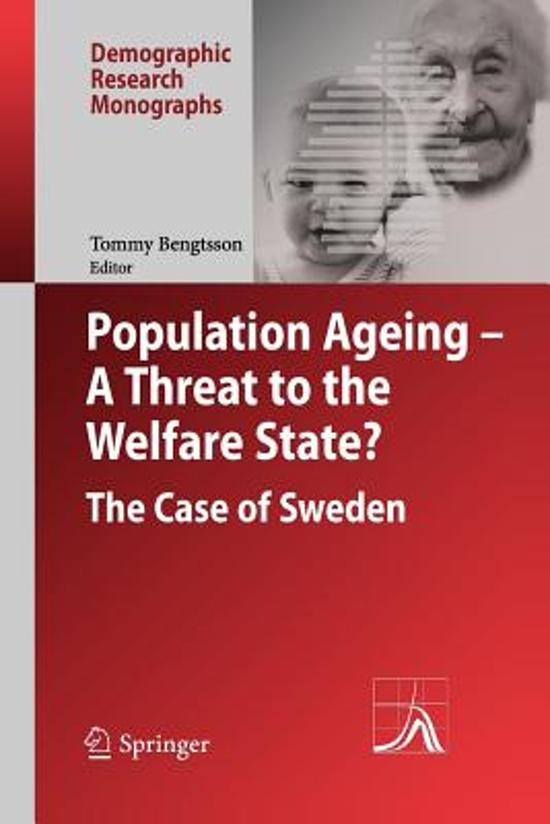 Tommy Bengtsson Population ageing, the shift in age distribution towards older ages, is of immense global concern. It is taking place to a varying degree all over the world, more in Europe and some Asian countries, less on the African continent. The worldwide share of people aged 65 years and above is predicted to increase from 7. 5% in 2005 to 16. 1% in 2050 (UN 2007, p. 11). The corresponding ?gures for developed countries are 15. 5 and 26. 2% and for developing countries 5. 5 and 14. 6%. While population ageing has been going on for some time in the developed world, and will continue to do so, most of the change is yet to come for the developing world. The change in developing countries, however, is going to be much faster than it has been in the developed world. For example, while it took more than 100 years in France and more than 80 years in Sweden for the population group aged 65 and above to increase from 7 to 14% of the population, the same change in Japan took place over a 25-year period (UN 2007, p. 13). The scenario for the future is very similar for most developing countries, including highly populated countries like China, India and Brazil. While the start and the speed differ, the shift in age structure towards older ages is a worldwide phenomenon, stressing the signi?cance of the concept global ageing.
Toon meer Toon minder