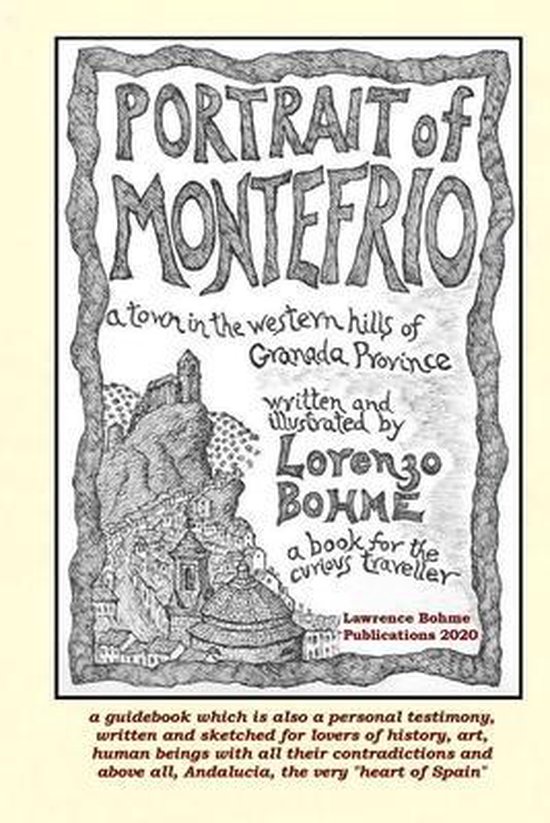 An artistic and historical guide to the Andalucian town of Montefrio by Lawrence Bohme, world citizen, artist and "passionately self-taught historian" who first discovered this remote place in 1960 and lived there between 1983 and 2002. The town's many monuments and archaeological treasures are fully documents with the author's own sketches and maps. The guide book is followed by eight stories of the author's life in Montefrio, and an eclectic assortment of stories about Spain previously published in Spain's English-language press. Lawrence is also the author of “Granada, City of My Dreams”, which he illustrated with pen-and-ink drawings and translated into French and Spanish, as well as "Stories from Spain and Other Places", a collection of "tales from the life".The monumental town of Montefrio, in the northwestern corner of Granada Province, stands well off the beaten path for most tourists. It came into mainstream history in the 14th century when the Moorish rulers of the Alhambra, 30 miles away in Granada, built a great fortress on its promontory intended, but never used, to ward off the attacks of the marauding Christian armies whose aim was to reconquer Spain from the Muslims, or at least to collect tribute from them. But long before, the region was home to native Iberians who left the remains of settlements and graveyards strewn about the spectacular landscape. The Romans settled there to grow wheat, mixing with the local peoples and eventually introducing them to Christianity. They built a series of mills which ingeniously gathered the water from a plunging river gorge in tall wells or "penstocks", which, when full, were opened to turn grinding stones. One of these mills can still be found today, with the help of Lawrence's guide.. When the Moorish invasion threatened the dwellers of the secluded “Cliffs of the Gypsies”, they withdrew to a forbidding hilltop, El Cerro del Castellon, leaving an impressive grid of excavated ruins. Lawrence has disovered and tried to identify a number of extraordinary rock carvings in the shape of a baptismal font, a primitive pulley for withstanding sieges, and even an olive oil mil, perhaps the oldest one extant in Spain. Lorenzo, who lived for ten years in a farmhouse nearby, eloquently describes these treasures with words and drawings in his highly personal book. He has included a collection of autobiographical stories relating his own arrival on the scene in 1960 as a hitch-hiking student in love with flamenco music, with as fellow traveller a young French novelist he met in the festival of Pamplona and who introduced him to Jean Cocteau in Malaga, as they hitched around Spain following the bullfights. He also bumped into Orson Welles and a curious man known to the Spanish press as "el falso Hemingway"...The book is enriched with Bohme’s lively articles and essays about Spanish mountain ham or “jamon serrano”, the making of virgin olive oil as well as tapas and the originally-Spanish sauce called mayonnaise. Several stories describe Lorenzo’s experiences of the Franco regime, and dramatic sightings of the dictator himself, while a student in Madrid and Granada Universities, as well as life on the island of Ibiza circa 1962 and in the mountain town of Capileira, at the heart of the region called La Alpujarra, the last Moorish frontier of medieval Spain.
Toon meer Toon minder