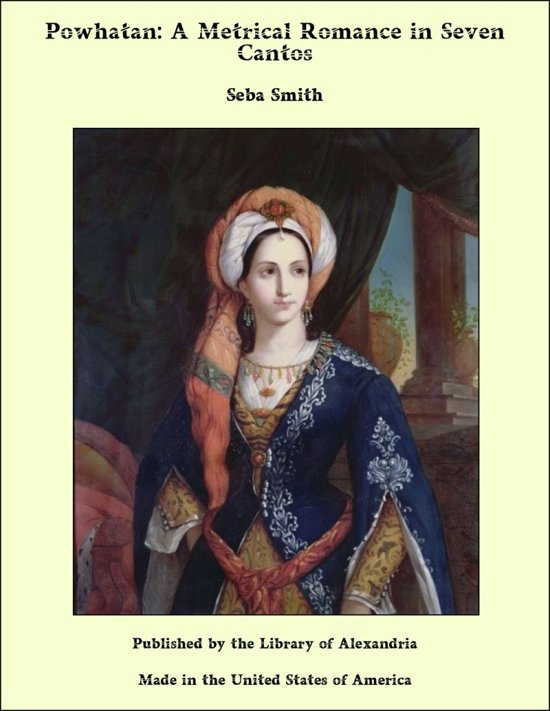 As Powhatan may be regarded as the most prominent personage in the poem, the author has thought proper to give the following well-drawn sketch of his character a place at the commencement of the work, rather than among the notes at the end. It is extracted from Burk's "History of Virginia," and will serve to show that grave and sober history assigns to the Indian chieftain a rank no less elevated and dignified than is given him in the following poem. "The greater part of his life was passed in what is generally termed glory and good fortune. In the cant of civilization, he will doubtless be branded with the epithets of tyrant and barbarian. But his title to greatness, although his opportunities were fewer, is to the full as fair as that of Tamerlane or Kowli Khan, and several others, whom history has immortalized as conquerors; while the proofs of his tyranny are by no means so clear and unequivocal. "Born to a slender patrimony, in the midst of numerous tribes more subtle than the Arabs of the desert, and whose independence spurned even the shadow of restraint, he contrived, by his valor and address, to unite them in one firm and indissoluble union, under his power and authority; giving his name to the new empire which his wisdom had erected, and which continued to flourish under his auspices and direction. "As a warrior, bold, skilful, and enterprising, he was confessedly without rival or competitor; inspiring with respect or terror even the formidable enemies who dared to make head against his encroachments. The powerful confederacy of the Manakins and Manahoacks, and the more distant inhabitants of the lakes, heard the name of Powhatan with uneasiness and alarm. "At the coming of the English he had reached the advanced age of sixty years, and enjoyed in the bosom of his family the fruits of his long and glorious exertions. The spectacle of men who came from beyond the sea, in floating and winged houses, and who fought with thunder and lightnings, could not fail to strike him by its grandeur and novelty. The intent of the strangers appeared, at first view, to be friendly; and he received them with courtesy. But his sagacious mind quickly developed the motives, and foresaw the consequences, of their arrival. He looked forward with regret to a renewal of his labors; and, at the age of sixty, he resolved to fight over again the battles of his youth. He might have lived in peace. He was aware of the superiority of his new enemy in the machines and instruments of battle, as well as in their discipline and experience; but these cold calculations vanished before his sense of honor and independence. Age could not chill the ardor of his heroic bosom. "In the private circle of his family, who appears to greater advantage than Powhatan?—what affection for his brothers! how delicate and considerate his regard for his children! what moderation and pity does he not manifest towards Captain Smith, when, subdued by the tears of Pocahontas, and touched, perhaps, with compassion for the bravery and misfortunes of his captive, he consented to spare his life! "Powhatan comes before us without any of those mortifying and abasing circumstances which, in the eye of human respect, diminish the lustre of reputation. History records no violence offered to his person; no insulting language used in his presence. Opechancanough had been dragged by the hair, at the head of hundreds of Indians; but never had the majesty of Powhatan been violated by personal insult. "In all disputes and conferences with the English, he never once forgets that he is a monarch; never permits others to forget it. "If your king,' said he to Smith, "has sent me presents, I too am a king, and I am in my own land.'