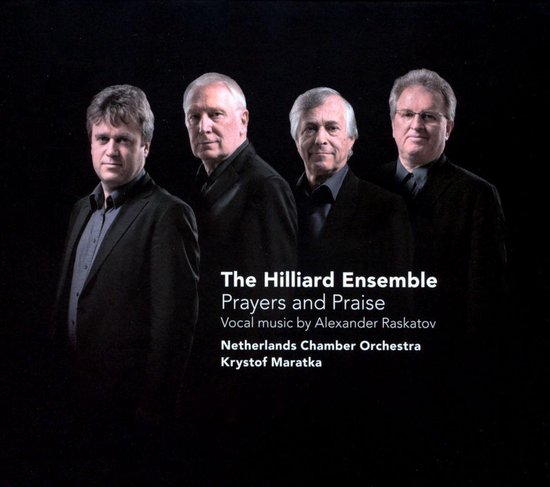 'Praise' consists of five liturgical texts from a number of services of the Byzantine rite, in Church Slavonic, the liturgical language of the Russian Orthodox Church: Kheruvimsya pesn', Otche nash, Svete tikhi, Gospodi vozzvakh and Angel vopiyashe. These are, respectively, the Hymn of the Cherubim (from the Great Entrance of the Divine Liturgy), the Lord's Prayer, O Gladsome Light (the evening hymn from Vespers), Let my prayer arise (the opening of the lamp-lighting psalms, also from Vespers) and the paschal megalynarion The Angel cried. 'Praise' is written for a quartet of male voices and bells and written for the Hilliard Ensemble!

These are very far from being arrangements for liturgical use, though there are certainly reminiscences of Russian mediaeval polyphony. The composer's response to these texts is immediate and personal, and frequently makes use of strikingly dramatic effects.

'Obikhod' (2002-03) also sets liturgical texts and was written for the same performers, but this time with the accompaniment of string orchestra. Commissioned by the Hilliard Ensemble and the Stuttgart Chamber Orchestra and first performed in November 2003. "Obikhod" is a word that refers to the book of common chants in use in the Russian Orthodox Church, though it is also erroneously used, especially outside Russia, to refer to an actual chant repertoire.

What is remarkable in both 'Praise' and 'Obikhod' is the way that such dissonant, frequently dense writing can create a sense of stasis and luminosity, a characteristic Raskatov shares with the late Alfred Schnittke, whose Symphony no. 9 he completed. The listener is left with the sensation that Raskatov has tapped into something primitive, some primordial connection with the secrets of life and death, and through music seeks to explore and transmit them. (from the linernotes written by Ivan Moody)