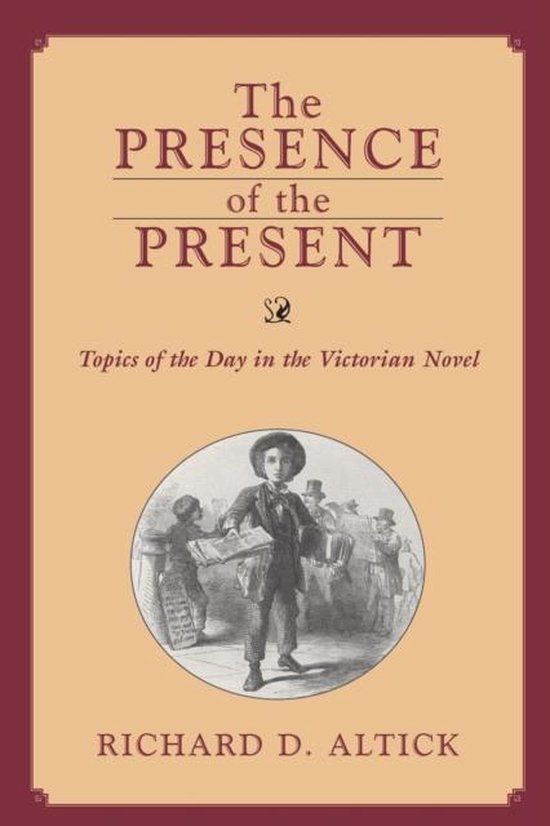 "The Presence of the Present: Topics of the Day in the Victorian Novel" is the first comprehensive study of Victorian novelists' use of the era's everyday culture and common knowledge in their writings. Victorian novelists knew that the men and women who bought and borrowed their books had an insatiable appetite for reading books about people like themselves in the instantly recognizable world in which they lived. They catered to this appetite by, among other devices, scattering through their pages allusions to people, places, and events in the news at the moment a novel was published, as well as to objects, scenes, and fashions that were particularly characteristic of the present-day setting. References to this body of common knowledge helped, in addition, to strengthen the intimate rapport with their readers that authors so much prized in the period, and they also contributed to the realistic effect that authenticated characters and scenes and thus encouraged readers' imaginative assent to the fiction. "The Presence of the Present" has been derived from approximately 150 novels of the era, from Pickwick Papers to Trollope's last novels and "The Mayor of Casterbridge." All the "great names" of Victorian fiction are here-Dickens, Thackeray, Disraeli, George Eliot, Charlotte Bronte, Trollope, Wilkie Collins, Elizabeth Gaskell, Hardy, Meredith-as well as a representative selection of the less-than-great-Charles Reade, Mary Elizabeth Braddon, Edward Bulwer-Lytton, Samuel Warren, and the unjustly neglected Robert Smith Surtees. The many illustrations, drawn principally form the "Illustrated London News" and "Punch" and from the novels themselves, re-create for a reader at the end of the twentieth century the same images that were evoked in the minds of the novels' first readers. The book, therefore, surveys that manner in which Victorian fiction draws upon the observations and experiences of the readers for whom the novelists wrote-not "posterity," but readers of the daily press and riders on the new railways. Here we meet the half-legendary figure of Stultz the fashionable tailor; learn about the messages conveyed at different times and on different social levels by cigar smoking and the wearing of gloves; discover the jokey career of the crinoline, the humors and corrupt practices of parliamentary elections, and scores of other topics that, when fully explained, help us to read with better understanding the living book of Victorian fiction. Richard D. Altick is Regents' Professor Emeritus of English at The Ohio State University. He is the author of numerous books, including "The English Common Reader, The Scholar Adventures, Victorian People and Ideas, The Shows of London, Paintings from Books, " and "Writers, Readers, and Occasions.""
Toon meer Toon minder