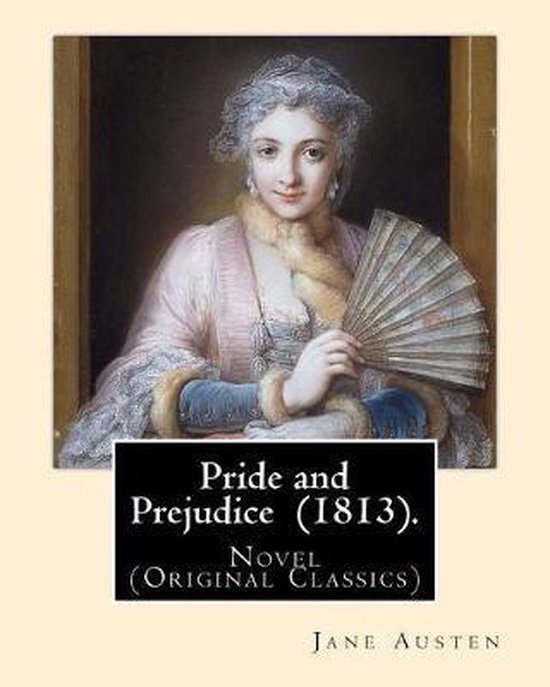 Pride and Prejudice is a novel by Jane Austen, first published in 1813. The story charts the emotional development of the protagonist, Elizabeth Bennet, who learns the error of making hasty judgements and comes to appreciate the difference between the superficial and the essential. The comedy of the writing lies in the depiction of manners, education, and marriage and money in the British Regency.Mr Bennet of the Longbourn estate has five daughters, but his property is entailed, meaning that none of the girls can inherit it. Since his wife had no fortune, it is imperative that one of the girls marries well in order to support the others on his death. However, Jane Austen's opening line 'It is a truth universally acknowledged that a single man in possession of a good fortune must be in want of a wife' is a sentence filled with irony and playfulness. The novel revolves around the necessity of marrying for love, not simply for mercenary reasons despite the social pressures to make a good (i.e. wealthy) match.PLOT:The novel opens with Mrs Bennet trying to persuade Mr Bennet to visit an eligible bachelor, Mr Bingley, who has arrived in the neighborhood. After some verbal sparring with Mr Bennet baiting his wife, it transpires that this visit has taken place at Netherfield (Mr Bingley's rented house). The visit is followed by an invitation to a ball at the local assembly rooms that the whole neighborhood will attend.At the ball, Mr Bingley is open and cheerful, popular with all the guests, and appears to be very attracted to the beautiful Miss Jane Bennet. His friend, Mr Darcy, is reputed to be twice as wealthy; however, he is haughty and aloof. He declines to dance with Elizabeth, suggesting that she is not pretty enough to tempt him.[2] She finds this amusing and jokes about the statement with her friends. Jane also attracts the attention of Mr Bingley's sister Caroline, who invites her to visit.Jane visits Miss Bingley and is caught in a rain shower on the way, catching a serious cold. Elizabeth, out of genuine concern for her sister's well being, visits her sister there. This is the point at which Darcy begins to see the attraction of Elizabeth, and Miss Bingley is shown to be jealous of Elizabeth since she wants to marry Darcy herself.Mr Collins, a cousin of Mr Bennet and heir to the Longbourn estate, visits the Bennet family. He is a pompous and obsequious clergyman because he expects each of the Bennet girls to wish to marry him due to his inheritance. He plans to propose to Elizabeth over Jane as he is led to believe Jane is taken.Elizabeth and her family meet the dashing and charming Mr Wickham who singles out Elizabeth and tells her a story of the hardship that Mr Darcy has caused him by depriving him of a living (position as clergyman in a prosperous parish with good revenue that once granted, is for life) promised to him by Mr Darcy's late father. Elizabeth's dislike of Mr Darcy is confirmed.[2]At a ball at which Mr Wickham is not present, Elizabeth dances with Mr Darcy rather against her will. Other than Jane and Elizabeth, all the members of the Bennet family show their lack of decorum. Mrs Bennet states loudly that she expects Jane and Bingley to become engaged and each member of the family exposes the whole to ridicule.The following morning, Mr Collins proposes to Elizabeth. She rejects him, to the fury of her mother and the relief of her father. They receive news that the Bingleys are leaving for London, and that Mr Collins has proposed to Charlotte Lucas, a sensible young woman and Elizabeth's friend. ...Jane Austen ( 16 December 1775 – 18 July 1817) was an English novelist known primarily for her six major novels, which interpret, critique and comment upon the British landed gentry at the end of the 18th century. Austen's plots often explore the dependence of women on marriage in the pursuit of favourable social standing and economic security.
Toon meer Toon minder