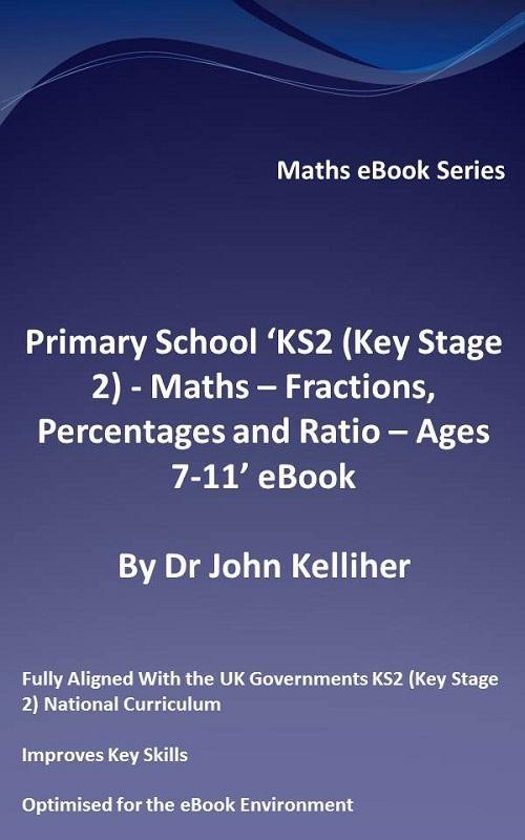 This eBook is part of our range of Key Stage 2 (KS2) maths eBooks that are fully aligned with the UK Governments national curriculum.

Fractions, Percentages and Ratio is a module within the Number and Algebra principle section our Key Stage 2 (KS2) publications. It is one module out of a total of eight modules in that principle section, the others being:
•Counting Practice
•Number Patterns and Sequences
•Integers
•Decimals
•Addition and Subtraction Practice
•Multiplication and Division Practice
•Algebra

After studying Primary School 'KS2 (Key Stage 2) - Maths – Fractions, Percentages and Ratio - Ages 7-11' eBook your child or the student should be confidently able to:
-understand unit fractions such as one-half, one-third and one-quarter as well as fractions that are several parts of one whole such as two-thirds, three quarters or four-fifths as well as locate them on a number line.
-use fractions as indicators of shapes and quantities.
-understand the notion of equivalent fractions and be able to simplify fractions by cancelling common factors.
-compare and order simple fractions for example by converting them to fractions with a common denominator.
-recognise the equivalence between the decimal and fraction forms of halves, quarters, tenths and hundredths.
-understand that 'percentage' means 'parts per 100', and that it can be used for conversions, comparisons and calculations.
-find the percentages of whole number quantities, using a calculator where appropriate.
-recognise the approximate proportions of a whole and use simple fractions and percentages to describe them, explaining their methods and reasoning.
-solve simple problems involving ratio and direct proportion