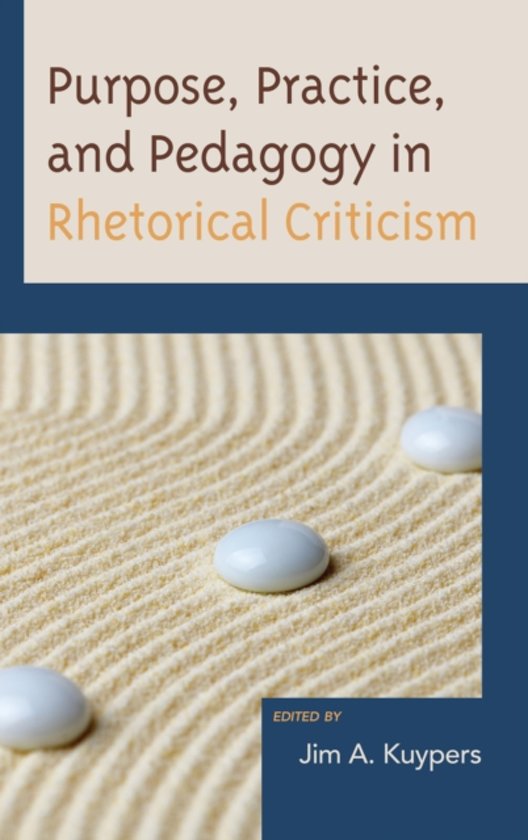 This edited volume fills a void in the literature concerning the purpose, practice, and pedagogy associated with performing rhetorical criticism. Literature regarding these issues-predominantly purpose-exists primarily as scattered journal articles and as sections within chapters of textbooks on rhetorical criticism. This book brings together 15 established rhetorical critics, each of whom offers well thought out and argued opinion pieces that stress the more personal nature of criticism. The purpose of this book is to serve as a disciplinary resource, and as a teaching and learning aid. Accessibility across areas of expertise and experience is stressed in this book. Critics range from junior faculty to emeritus, and represent a broad spectrum of views on criticism. In this sense the book offers a snapshot of the views of a wide swath of successfully practicing, contemporary rhetorical critics.
Toon meer Toon minder

Jim Kuypers assembled 15 top rhetorical critics to contribute to this excellent volume. . . .The audiences for criticism today are small, and scholars write in ways that further limit their potential agency. Kuypers's edited collection, with the clarity of argument and audience present especially in a few chapters, offers a potential breakthrough. * Southern Communication Journal * Should Jim A. Kuypers's Purpose, Practice, and Pedagogy in Rhetorical Criticism make its way to your bookshelf (and it should), you would be right to put it close to other anthologies of rhetorical criticism- Carl Burgchardt's with Strata, as well as Kuypers's earlier collection with Lexington, to name just two. At the same time, the book delivers something different than traditionally argued academic essays' of or about rhetorical criticism. Instead, writes Kuypers, this is a book of opinion piece[s] that stress the very personal nature of criticism.'.... It is both pleasurable and edifying to read these scholars write about their formation as intellectuals, their different ways of giving meaning to rhetoric, their tricks in the classroom, their passion, and sometimes their anguish. * Rhetoric & Public Affairs * This is an excellent volume that raises important questions for rhetorical critics about how we practice and teach our art. This book offers a range of candid and clear position statements by prominent scholars that take differing perspectives on what it means to do rhetorical criticism. It is rare to have a venue outside conferences, classrooms, and interpersonal conversations to openly reflect on the diversity of ways to practice and teach rhetorical criticism. This book expands the reach of these conversations to its readers and provides a valuable resource for new and experienced rhetorical critics. Doctoral students and junior scholars will particularly benefit from this volume as they seek to define their own positions and begin their teaching careers. -- Danielle Endres, University of Utah Jim Kuypers has assembled an impressive group of rhetorical scholars to provide a comprehensive overview of the contours surrounding rhetorical criticism for a twenty-first century world. The insightful chapters cover everything from what it means to do rhetorical criticism to how criticism can be practiced in a digital age. Scholars and students will provide from a book that discusses such wide-ranging issues and is a must for any serious rhetoric scholar today. -- Jason A. Edwards, Bridgewater State University
Toon meer Toon minder