Quadrilogy: The 13 Satanic Bloodlines - Paving the Road to Hell 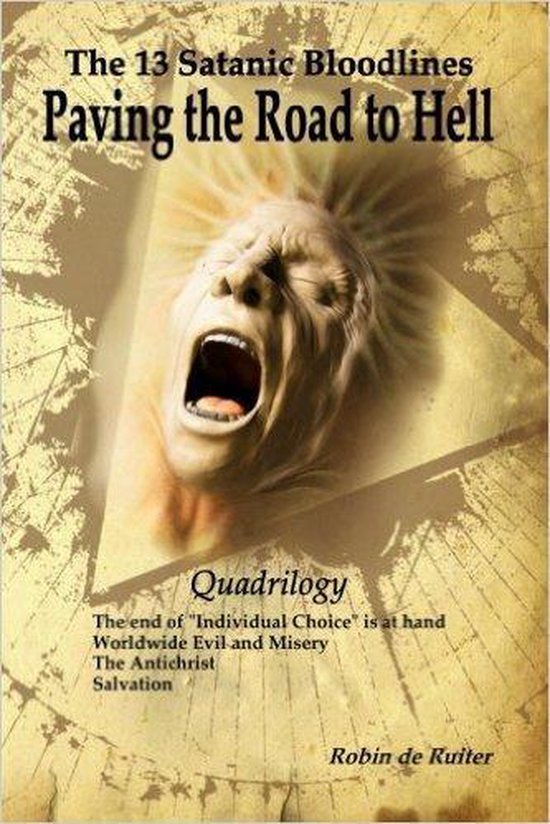 We are raised, by tradition, to trust our governments, and are convinced that they care about us. This, however, is a big mistake. Below the surface of official politics lies a complicated social and intellectual process that is taking place. The visible world leaders are mere puppets directed by an invisible power from behind the scenes.
This geo-political power consists of the richest families on this planet. Together with the most powerful multinationals they rule and control most countries and coalitions. The true aim of this elite group is complete control of Planet Earth.
This four-volume book is different from other books on the topic. It is a very unique publication and reading it will undoubtedly change the way you look at both history and the world today. It completely turns everything on its head. Once you read it, all of a sudden you will see the world around you in infrared. You soon see things which are simply not possible to view with the range of standard vision.
The contents of this book is highly controversial and uncompromising. It describes a monster that we, in all our ignorance, have created together. It also serves to give us an idea of what's in store for the near future, so we can better prepare for what's coming our way.
In 2006 the first French edition of this book was banned in France.
Over the last 25 years there has been a significant increase of awareness among the population about the creating of a dictatorial New World Order. This is largely due to a result of the September 2001 attack on the twin towers in New York which led to the formation of hundreds of "freedom of information" groups.

Unfortunately one of the great tragedies of this dramatic rise of information about the New World Order is that there are prominent groups and individuals who are championing the need for the masses to wake up to the New World Order agenda, yet the beliefs of such groups and individuals clearly show they are also themselves deceived and doing more harm than good with their poisonous mixture of truth and error.

The New World Order agenda has been an operation that has been running for many years but due to misinformation and individuals having their own secret eureka understandings and interpretations it would seem that the secret plan of feeding surrogates of influence with “half truths“ and “misinformation“ has been a deliberate ploy to keep people in a state of deception despite people feeling they are more informed than the general public.

TRUTH MIXED WITH ERROR IS THE DEADLIEST FORM OF DECEPTION
Unfortunately there are no correct variations of truth about the true nature of the New World Order agenda. There is only one truth which has been purposely covered and up and re-branded to ensure that those who dare to seek and question are unsuspectingly led into a dangerous cocktail of truth missed with error.

In a world of chaos and misinformation how can we truly know that what we hear about the New World Order is real? In a world where we are consciously trying to ensure we don't get hoodwinked or deceived by “half truths“ how can we really know for sure that there is an agenda which involves corporations and people of influence in a way that simply seems too astonishing to believe? How can we be sure that there is a secret dictatorial New World Order agenda?

The most powerful weapon any human can posse comes in the form of knowledge. In this case, it is the correct and true knowledge of the New World Order. Understanding the right history and development of the New World Order is the most secure protection against the "half truths" and false dogmas now being propelled by those believing they are warning and revealing the truth on the one world government agenda.

You maybe be wondering what makes this book different from other books on the topic.

This book was written for serious people who are concerned about the growing rise of disinformation and misinformation on the internet and the media. It is one of the most important books to separate light from darkness as far as the New World Order is concerned.

This book will firm up your understanding of the evolution of the one world government concept and its deceptive snare which spares none whether one is an unbeliever or believes that they believe the truth. It is based on primary source documentation and real tough to argue against quotes and revelations.

Much of the detailed information in this book came from personal discussions between the author and insiders who have stepped out of the system of the New World Order. These sources will remain anonymous in order to protect them from possible actions of revenge and cruelties by those who favor the merciless oppression of humanity.

In addition, a number of prominent politicians, scientists and historians have contributed enormously to the publication of this book by offering professional and intellectually sound advice. Several extraordinary investigators and archivists also have worked for years with the author to follow trails through piles of documents and connect facts.

The first edition of this book was written over a decade ago, long before others started championing the need for the masses to wake up to the New World Order agenda. This first edition did not claim to be into futurism. However, a retrospective view of the events of the last twenty-five years shows that practically all topics mentioned in the book have come to fruition, often in an awesome manner.

From the beginning of the world until now, the basic doctrine of satanic religion has been the conviction that one day Lucifer will openly rule this world.

As long as we do not understand this dogma, we shall never understand why the ruling elite are trying to move humanity towards a world dictatorship. As long as our global elite considers the devil to be their god and believes that Lucifer’s ultimate goal is establishing a dictatorial world power, everybody on earth will experience the daily consequences of this.
Toon meer Toon minder