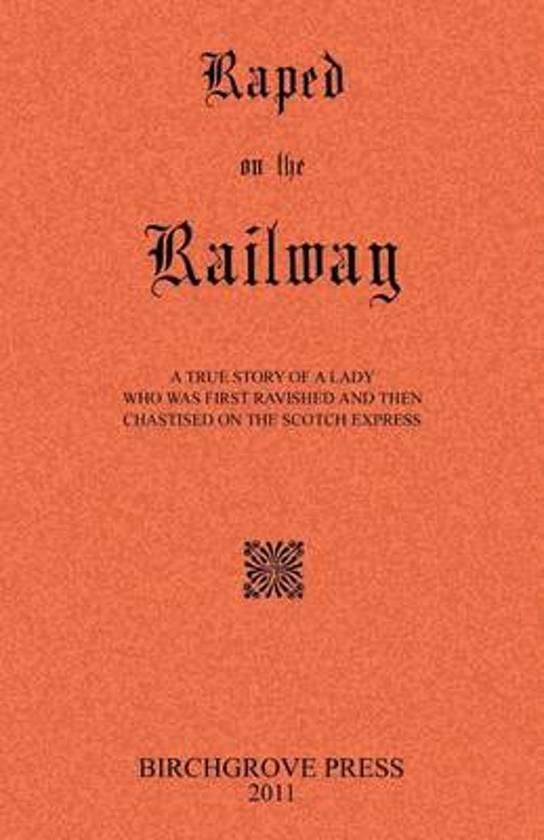 Raped on the Railway is a late-Victorian tale of sex and flagellation. Brandon, a married painter, takes advantage of a young lady on the Scotch Express. Her brother-in-law, who is also on the train, suspects her of consenting to her ravisher's advances and punishes her severely for the perceived slight to his family's honour. First published c. 1899 with the false imprint date 1894, Raped on the Railway was issued, most probably by Charles Carrington in Paris, on hand made paper in a limited edition of 300 copies with wrappers depicting a rape scene. The illustration is signed A. Lambrecht. Adolphe Lambrecht illustrated Carrington's translation of The Mysteries of Verbena House (1882): Les Mysteres de la Maison de la Verveine (1901). A second edition of Raped on the Railway was issued c. 1904. It was also backdated to 1894 but printed on ordinary paper and printed in a limited edition of 500 copies. The author is unknown. Most of the poems, however, are lifted from Aleister Crowley's White Stains, which was published clandestinely, probably by Leonard Smithers, in 1898.Verse excerpts are from Crowley's 'Rondels' I ], 'Mathilde, ' 'Ode to Venus Callipyge, ' and 'Ad Lydiam, Ut Secum A Marito Fugeret' 5 ]. White Stains, The Mysteries of Verbena House, and Les Mysteres de la Maison de la Verveine are available from Birchgrove Press."
Toon meer Toon minder