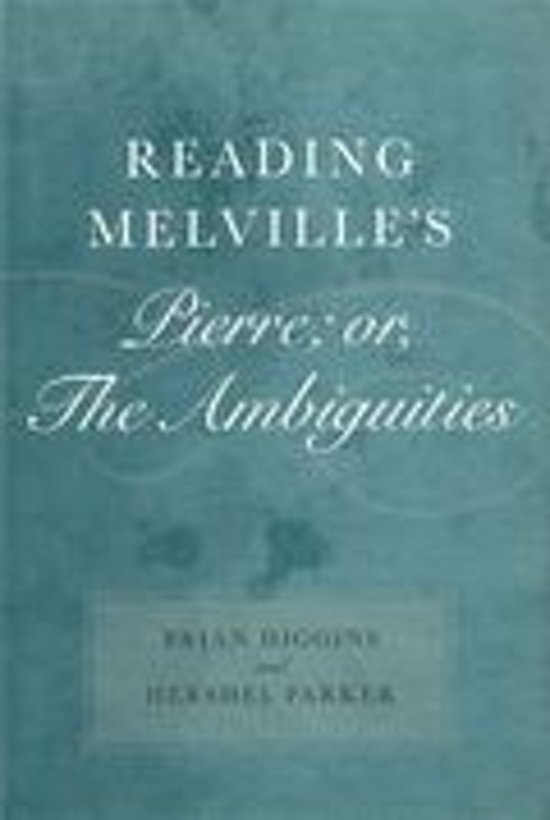 Herman Melville's Pierre; or. The Ambiguities has a storied place in the history of American publishing. Melville began writing this follow-up to Moby-Dick in October 1851, thinking that it might prove even more significant than its predecessor. The 1852 publication of Pierre was catastrophic, however. Melville lost his English publisher, and American reviewers derided the book and called the author mad. InReading Melville's ''Pierre; or, The Ambiguities,'' noted Melville authorities Brian Higgins and Hershel Parker probe the daunting story behind a deeply flawed but revealing work, one that directly reflects the major crisis of Melville's authorial life.

Weighed down by huge debts, Melville took the manuscript of Pierre to his New York publisher, Harper and Brothers, desperately needing the new work to be a financial success. The Harpers balked at publishing such a dangerous psychological novel (incest was a theme) and offered him less than half the royalties they had paid for his previous books. The anguished Melville accepted the contract but subsequently added new passages to his manuscript -- passages that disparage the publishing industry and reflect his agony at the looming loss of his career.

Higgins and Parker examine what can plausibly be reconstructed of Melville's original version of Pierreand explore the consequences of his belated decision to expand his work, showing in detail how his hastily written and awkwardly inserted additions marred much of what he had brilliantly achieved in the shorter version. They demonstrate that to understand Pierre, and Melville himself at this crisis, one must first understand the compositional history that resulted in the book as published.

Setting Pierre in the context of Melville's literary life, Higgins and Parker's study is an illuminating demonstration of biographical and textual scholarship by two of the field's finest practitioners.

Subtitel
A Reading of the Poems
Thema Subject Code
DS