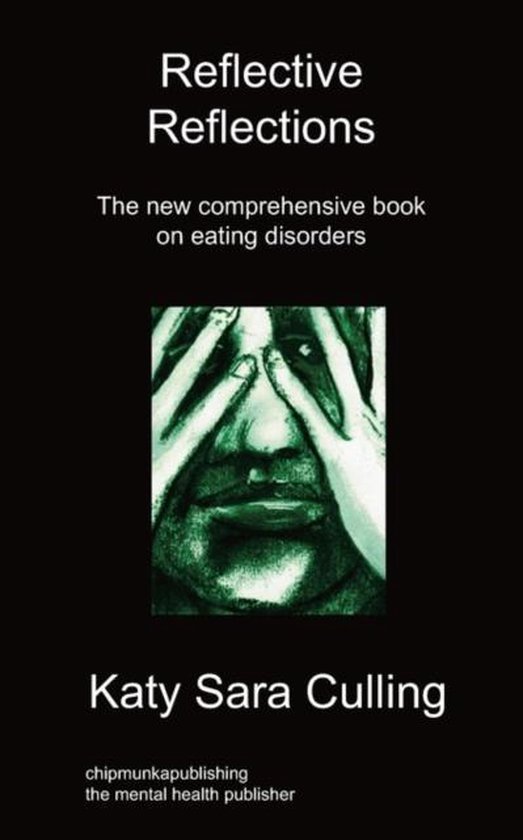 Description Reflective Reflections is the quintessential up-to-date book on ALL eating disorders, written from the perspective of a recovered sufferer, therefore especially about anorexia and bulimia, but not forgetting about other eating disorders out there. Written from personal experience and extensive research, and for the first time tackling the dangers of the Internet. This book considers the factors that might predispose someone to an eating disorder, what are the many and main causes of different eating disorders, and the factors that trap people within these horrific illnesses that trick your mind. Eating disorders bring disarray to both the life of the sufferer and to those people around who love them. Eating disorders are nasty, they fight dirty, but they can be beaten, and I, the author am proof of that after 15 years of anorexia and bulimia myself. But never forget, eating disorders kill. They kill young people. Indiscriminately. Killing without warning, and quickly. I have lost a few friends to eating disorders, I close my eyes and my heart misses a beat because they were so young, so deserving of life, as deserving of life as me and yet here I am and they are gone. I see friends still living within its grasp year after year and I feel sad for them - and an ill part of me feels jealous. I see others who have partly recovered, and some who are back to "normal." This book will answer all your questions on eating disorders in a comprehensive but friendly manner, and I hope it helps you be you a sufferer, carer, or medical professional. About the Author Katy Sara Culling was born in Liverpool, North England, in January 1975, sharing her birth date rather aptly with Virginia Woolf. Daughter of Sue and Paul Culling, her family moved back to its roots in Derbyshire, where she grew up along with her younger sister Beth, in the village of Castle Donington, on the Derbyshire-Leicestershire border. However, even as young as 5 she exhibited symptoms of bipolar disorder. She attended a private school for girls, Loughborough High School, where she was a high achieving student. Unfortunately, due to bullying and also to numb her mania and depression, she developed anorexia nervosa and began to self-harm. Katy Sara then went to The University of Nottingham, where she studied Biochemistry and Nutrition. She did her (1st class) thesis on alcohol and metabolism, interested in the psychology of Alcoholism. All this was done despite considerable illness including over 60 suicide attempts and purging-type anorexia - and yet more bullying. Her good work at Nottingham lead to an offer of a place at The University of Oxford, where she studied for a PhD (DPhil) in Clinical Medicine. In her final year she became so ill with anorexia that she was in hospital (first as a day patient, then an inpatient, and eventually a sectioned inpatient). During those two years she attempted suicide over 300 times, dying twice, only to be revived. She finally, at the age of 28 got a diagnosis of bipolar disorder and the correct medication, and had been mostly fine ever since. Her eating disorder spontaneously recovered. She later wrote up her PhD thesis and published her results. Now Katy Sara is mostly well and has become a writer, wanting to prevent others from suffering as she did. She writes mainly about bipolar disorder and anorexia but also other psychiatry/mental health topics, and her first anorexia/bipolar memoir Dark Clouds Gather (autobiographical) was published by Chipmunkapublishing. Her second book, Too Good For This World, a collection of stories from people with bipolar disorder and major depression is also available, including people with eating disorders. Katy Sara also spends her time working in medical research, and helping fellow survivors of anorexia, bulimia and bipolar disorder through charitable organisations whilst trying to maintain her own good mental health. She is an advocate for all survivors of these illnesses
Toon meer Toon minder