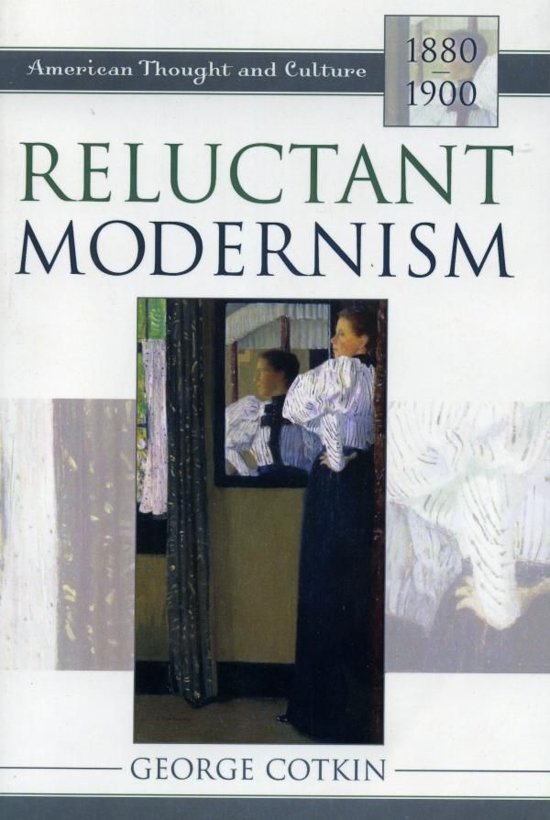 In the last two decades of the nineteenth century Americans were faced with the challenges--and the uncertainties--of a new era. The comfortable Victorian values of continuity, progress, and order clashed with the unsettling modern notions of constant change, relative truth, and chaos. Attempting to embrace the intellectual challenges of modernism, American thinkers of the day were yet reluctant to welcome the wholesale rejection of the past and destruction of traditional values.
In Reluctant Modernism: American Thought and Culture, 1880-1900, George Cotkin surveys the intellectual life of this crucial transitional period. His story begins with the Darwinian controversies, since the mainstream of American culture was just beginning to come to grips with the implications of the Origin of Species, published in 1859. Cotkin demonstrates the effects of this shift in thinking on philosophy, anthropology, and the newly developing field of psychology. Drawing upon his extensive knowledge of these fields, he explicates, in terms easily accessible to the general reader the essential tenets of such major thinkers and writers as William James, Franz Boas, Charlotte Perkins Gilman, Henry Adams, and Kate Chopin.
Cotkin devotes careful consideration to the underlying assumptions of racism that culminated in the `separate but equal' doctrine, the struggles of women to combat the pseudoscientific arguments relegating them to the domestic sphere, and the attempts of self-appointed custodians of culture to create a morally improving public culture that would counteract the decadent influence of consumerism.

The contribution of this book to the field is that it is a well-organized, clearly written, and very readable work on this period in American thought and culture. It will be a welcome addition to the literature and should easily be used in undergraduate courses on nineteenth-century American culture. -- Regina Morantz-Sanchez, University of Michigan This fine book is both a useful summary and an original treatment of a uniquely interesting and pivotal period. -- James Hoopes, Babson College In a comprehensive synthesis of recent scholarship as well as a reconsideration of sources from the late nineteenth century and the early twentieth century, George Cotkin provides an impressive interpretation of U.S. thought and culture at a time of intellectual upheaval and culture clash... Cotkin's exposition is lucid, his generalizations are largely convincing, and his incorporation of recent scholarship is admirable. The Historian Reluctant Modernism is an elegant, timely synthesis. The study is a gift to historians and students, uniquely probing the minds of male and female intellectuals in the period and illuminating major changes in post-Darwinian American culture. -- Sarah Elbert, SUNY Binghamton
Toon meer Toon minder