Report of the Secretary of the Treasury, Read in the House of Representatives of the United States, January 19th 1795 Containing a Plan for the Further Support of Public Credit. 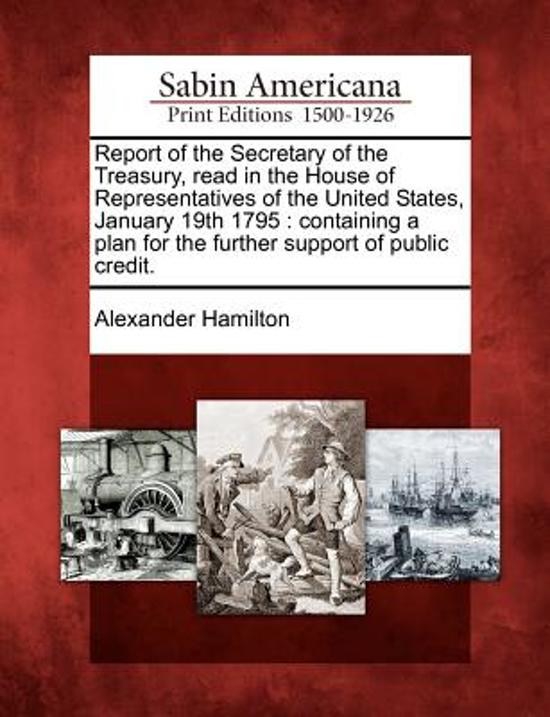 Title: Report of the Secretary of the Treasury, read in the House of Representatives of the United States, January 19th 1795: containing a plan for the further support of public credit.Author: Alexander HamiltonPublisher: Gale, Sabin Americana Description: Based on Joseph Sabin's famed bibliography, Bibliotheca Americana, Sabin Americana, 1500--1926 contains a collection of books, pamphlets, serials and other works about the Americas, from the time of their discovery to the early 1900s. Sabin Americana is rich in original accounts of discovery and exploration, pioneering and westward expansion, the U.S. Civil War and other military actions, Native Americans, slavery and abolition, religious history and more.Sabin Americana offers an up-close perspective on life in the western hemisphere, encompassing the arrival of the Europeans on the shores of North America in the late 15th century to the first decades of the 20th century. Covering a span of over 400 years in North, Central and South America as well as the Caribbean, this collection highlights the society, politics, religious beliefs, culture, contemporary opinions and momentous events of the time. It provides access to documents from an assortment of genres, sermons, political tracts, newspapers, books, pamphlets, maps, legislation, literature and more.Now for the first time, these high-quality digital scans of original works are available via print-on-demand, making them readily accessible to libraries, students, independent scholars, and readers of all ages.++++The below data was compiled from various identification fields in the bibliographic record of this title. This data is provided as an additional tool in helping to insure edition identification: ++++SourceLibrary: Huntington LibraryDocumentID: SABCP01410500CollectionID: CTRG94-B5225PublicationDate: 17950101SourceBibCitation: Selected Americana from Sabin's Dictionary of books relating to AmericaNotes: "Printed by Order of the House of Representatives." Alexander Hamilton was Secretary of the Treasury, 1789-1795.Collation: 90 p., 10] folded leaves of plates; 20 cm
Toon meer Toon minder