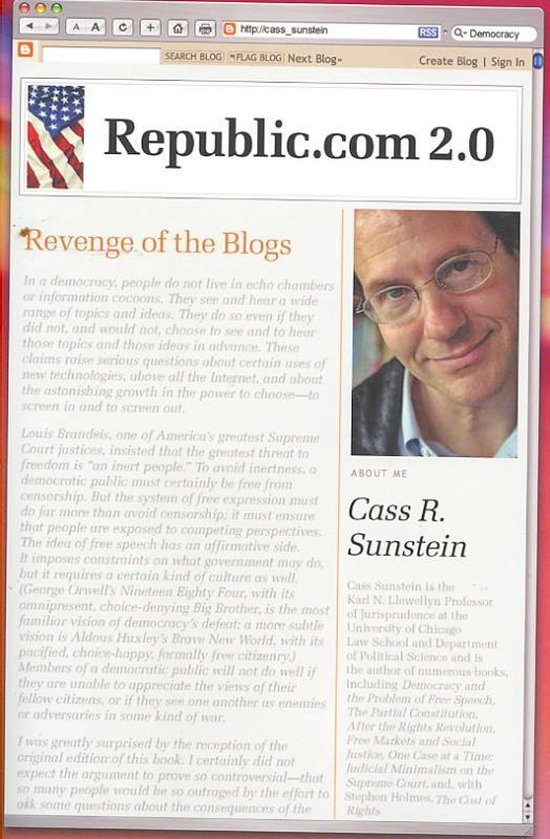 Cass R. Sunstein, born on September 21, 1954, has written for many popular newspapers and magazines, including The New York Times, The Washington Post, The Los Angeles Times, The Boston Globe, The Chicago Tribune, The American Prospect, Time, Harpers, and The New Republic. He has also appeared on many national television and radio shows, including Nightline, Fox News, the ABC Evening News, the NBC Evening News, 20/20, the News Hour, The O'Reilly Factor, and Fresh Air.

Sunstein graduated in 1975 from Harvard College and in 1978 from Harvard Law School magna cum laude. After graduation, he clerked for Justice Thurgood Marshall of the U.S. Supreme Court. Before joining the faculty of the University of Chicago Law School, he worked as an attorney-adviser in the Office of the Legal Counsel of the U.S. Department of Justice. Mr. Sunstein has testified before congressional committees on many subjects, and he has been involved in constitution-making and law reform activities in a number of nations, including Ukraine, Poland, China, South Africa and Russia. A member of the American Academy of Arts and Sciences, Mr. Sunstein has been Samuel Rubin Visiting Professor of Law at Columbia, visiting professor of law at Harvard, vice-chair of the ABA Committee on Separation of Powers and Governmental Organizations, chair of the Administrative Law Section of the Association of American Law Schools, a member of the ABA Committee on the future of the FTC, and a member of the President's Advisory Committee on the Public Service Obligations of Digital Television Broadcasters.

Mr. Sunstein is author of many articles and a number of books, including Republic.com, Risk and Reason, The Cost-Benefit State, Why Societies Need Dissent, The Second Bill of Rights, Laws of Fear: Beyond the Precautionary Principle, and Worst-Case Scenarios.

What happens to democracy and free speech if people use the Internet to listen and speak only to the like-minded? What is the benefit of the Internet's unlimited choices if citizens narrowly filter the information they receive? Cass Sunstein first asked these questions in 2001's Republic.com. Now, in Republic.com 2.0 , Sunstein thoroughly rethinks the critical relationship between democracy and the Internet in a world where partisan Weblogs have emerged as a significant political force. Republic.com 2.0 highlights new research on how people are using the Internet, especially the blogosphere. Sunstein warns against 'information cocoons' and 'echo chambers', wherein people avoid the news and opinions that they don't want to hear. He also demonstrates the need to regulate the innumerable choices made possible by technology. His proposed remedies and reforms emphasize what consumers and producers can do to help avoid the perils, and realize the promise, of the Internet.
Toon meer Toon minder