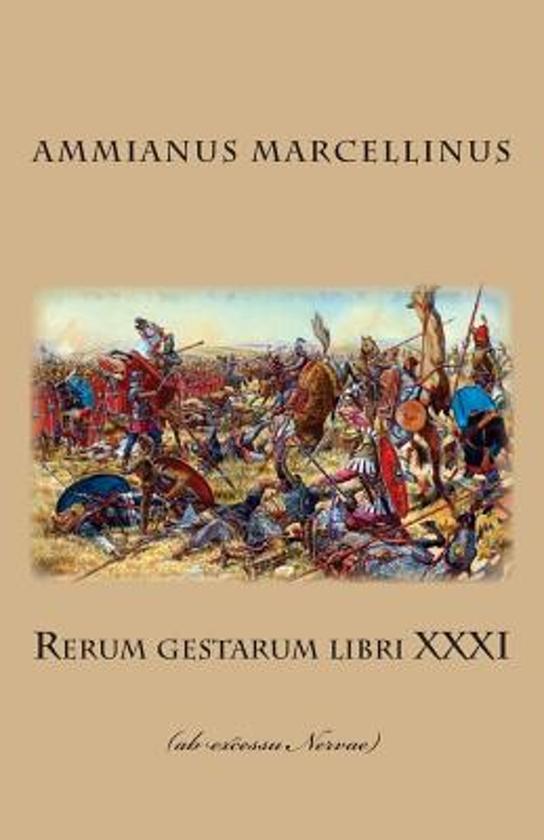 Ammianus Marcellinus was the last great Roman historian, continuing the histories of Tacitus from AD 96 down to his own day. The first thirteen of his thirty-one books are lost: the remainder describe AD 354 - 378.
Alles van Ammianus Marcellinus

Ammianus Marcellinus was a fourth-century Roman historian. He wrote the penultimate major historical account surviving from Antiquity (the last was written by Procopius). His work chronicled in Latin the history of Rome from 96 to 378, although only the sections covering the period 353-378 are extant. Ammianus was born between 325 and 330 in the Greek-speaking East, possibly at Antioch. The surviving books of his history, the Res Gestae, cover the years 353 to 378. Ammianus served as a soldier in the army of Constantius II in Gaul and Persia. He was "a former soldier and a Greek" (miles quondam et graecus), he tells us, and his enrollment among the elite protectores domestici (household guards) shows that he was of noble birth. He entered the army at an early age, when Constantius II was emperor of the East, and was sent to serve under Ursicinus, governor of Nisibis in Mesopotamia, and magister militum. He returned to Italy with Ursicinus, when he was recalled by Constantius, and accompanied him on the expedition against Claudius Silvanus, who had been forced by the allegedly unjust accusations of his enemies into proclaiming himself emperor in Gaul. With Ursicinus he went twice to the East. On one occasion he was separated from Ursicinus and took refuge in Amida, which was then besieged by the Sassanid king Shapur II; he barely escaped with his life. When Ursicinus lost his office and the favour of Constantius, Ammianus seems to have shared his downfall; but under Julian, Constantius's successor, he regained his position. He accompanied this emperor, for whom he expresses enthusiastic admiration, in his campaigns against the Alamanni and the Sassanids. After the death of Julian, he took part in the retreat of Jovian as far as Antioch. He was residing in Antioch in 372 when one Theodorus was thought to have been identified by divination as a new Emperor, successor to Valens, and with many others implicated by the use of torture, cruelly punished. Though pagan, he was mostly tolerant of Christians. At Rome, he wrote in Latin a history of the Roman empire from the accession of Nerva (96) to the death of Valens at the Battle of Adrianople (378), in effect writing a continuation of the history of Tacitus. He presumably completed the work before 391, since at 22.16.12 he praises the Serapeum in Egypt as the glory of the empire, and the temple was destroyed by Christians at the end of that year. Res Gestae (Rerum gestarum Libri XXXI) was originally in thirty-one books, but the first thirteen are lost (modern historian T.D. Barnes argues that the original was actually thirty-six books, which would mean that eighteen books had been lost). The surviving eighteen books cover the period from 353 to 378. As a whole it has been considered extremely valuable, being a clear, comprehensive and in general impartial account of events by a contemporary. Like many ancient historians, Ammianus had a strong political and religious agenda to pursue, however, and he contrasted Constantius II with Julian to the former's constant disadvantage; like all ancient writers he was skilled in rhetoric, and this shows in his work.
Toon meer Toon minder