Tales of the Feathered Serpent Rise of the Halfling King 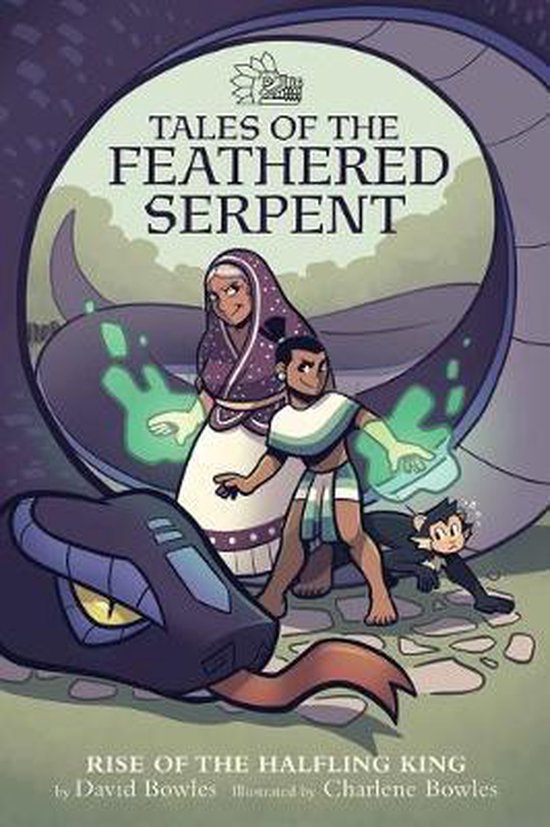 A middle grade graphic novel follows the adventures of a magical boy from Maya mythology. The first of a series based on ancient Mesoamerican myths and legends. Sayam has always been different from other kids-he's very short for his age, his best friend is a monkey, and most curious of all: he was born from an egg! His grandmother, a witch, found him and taught him all the ancient magic she uses to help her people. So when a giant snake starts terrorizing a nearby city, Sayam decides it's time for him to use his knowledge to help others, and steps into action. But the beast might not be Sayam's biggest problem: the ruthless King Kinich Kak Ek sees Sayam as a threat to his throne. Prophecy declares that whoever succeeds at three impossible tests will be king. Monstrous snakes and impossible tests are a lot for a boy to handle, but Sayam is brave and has a loyal monkey, a wise grandmother, and magical knowledge on his side! Fans of adventure tales with a mythological focus-such as Bowles' previous work with Latin American myths, The Chupacabras of the Rio Grande and the Garza Twin series, as well as Rick Riordan Presents, especially the Storm Runner novels-will love this exciting and accessible graphic novel. Rise of the Halfling King is also an invaluable educational tool for middle school students-it's a well-researched introduction to Maya culture, made accessible by an expert in Mesoamerican culture and juvenile literature. Bowles previously stitched together tales from Maya, Aztec, and other ancient mythology from pre-Columbian Mexico in the critically-acclaimed YA book, Feathered Serpent, Dark Heart of Sky. David Bowles is a Mexican American author and educator based in South Texas. He has written fourteen books. His middle grade novel-in-verse They Call Me Guero has been the recipient of numerous honors such as the Pura Belpre Honor, the Tomas Rivera Mexican American Children's Book Award, the Claudia Lewis Award for Excellence in Poetry, the Walter Dean Myers Honor Award for Outstanding Children's Literature, the Texas Institute of Letters Best Middle Grade Book Award, the Skipping Stones Award; the book is also an Americas Book Award Commended Title and was named in the Bluebonnet Award Masterlist. Some of his other books are Feathered Serpent, Dark Heart of Sky and The Smoking Mirror. Charlene Bowles is a Mexican American digital artist based in Texas. Her work has been featured on the covers of the award-winning Garza Twins books.
Toon meer Toon minder