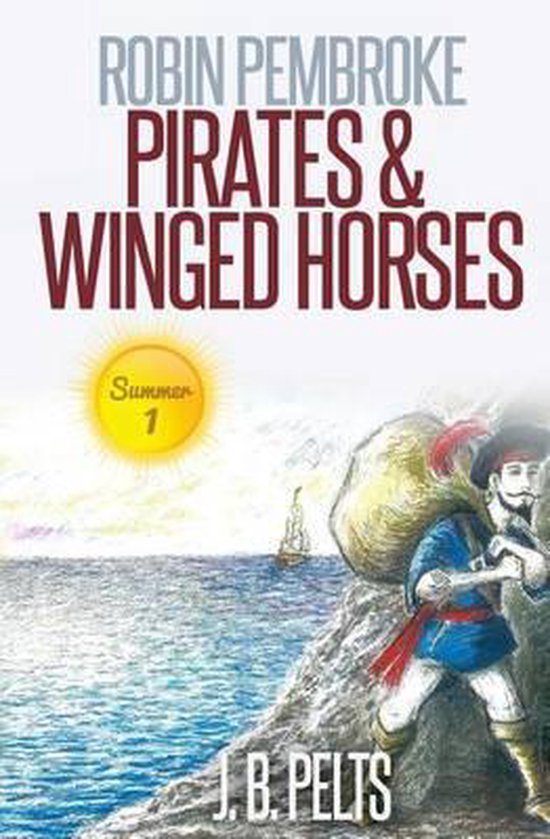 Robin Pembroke: Pirates & Winged Horses is the first book in J. B. Pelts' fiction adventure series, which will take you on a non-stop adventure-packed ride as Robin discovers his inheritance of a house on the island of Corentin and ends up spending his summer making new best friends, together chasing a fantastical pirate mystery that is interwoven with the hunt for wondrous secret treasures.

Robin Pembroke didn't foresee pirates playing any part in his upcoming school holidays whatsoever. But then again neither did he expect to find a secret treasure map, uncover a dinosaur fossil, sight a legendary lake monster, or make three fantastic new friends. That though is exactly what happened.

Without a proper holiday in his almost-11 years of life, Robin was expecting to spend another summer in his parent's flat in rain-soaked middle England. That was until he arrived home one day to the news that his Great Aunt Dorothy had passed away and left him her estate on the island of Corentin. Robin hadn't even known that he'd had a Great Aunt Dorothy, let alone had he ever heard of Corentin.

Join Robin as he and his new friends, Georgie, Millie, and Olwenn, stumble upon a pirate mystery that has been waiting over 200 years to be uncovered. After finding a secret entrance into Smuggler's Cove, clues start to mount up that point to the fact that not all of the pirates had actually died during the ambush there in 1812, the adventure unravelling secrets as they chase the story of the pirate Captain Longshadow across the island and across time.

With its mysterious Breton heritage and even more mysterious stone giants standing guard over Corentin's eastern shore, the kids race from castle ruins to haunted inns to cannonballed ships as Robin explores this magical new island. As the days pass chapter by chapter, the five weeks of summer disappear in an adventure-filled haze. The solving of one mystery leads to another taking its place, and the questions mount along with the kids' realization as to the size of what it is that they are uncovering. Why had the Kerezenn really sunk? What was true reason that the lighthouse wasn't working that night? Whatever happened to the pirate ship Firemast? Where is Nante's lost treasure? And who is Captain Longshadow?

Beyond Robin's new friends of Millie, who is late for just about everything and has a magical artistic talent, her brother Olwenn, with his checkered shirts and knowledge of all sorts of things about the history of Corentin, and Georgie, who lives in London but visits with her grandparents every summer and her frequent ability to be at the forefront of their adventures, we also meet many others who influence Robin's five weeks on the island. There is Alfie Andrews and his friends Nigel and Margaret who are computer wizzes and come to Robin's aid; the streaked haired Ezzie Telfair who dreams of being an archeologist; and Georgie's brother Greg together with his girlfriend Vicki Painter, who herself has a fantastic knowledge of the mysterious stone giants.

Not everyone Robin encounters though is as friendly or helpful, and after he runs into the Mauriers he tries his best to avoid them for the remainder of his visit, especially Seb and Angelina who seem to have a particular hatred of his new best friends.

The island of Corentin is magically brought to life in the adventure of a lifetime, and is a summer that will change Robin's world forever. Become engrossed with the tale as it races along, and get lost in that 'just one more chapter' feeling as you live through Robin's summer with him, feeling every high and celebrating every success, and being amazed at each new twist and turn.