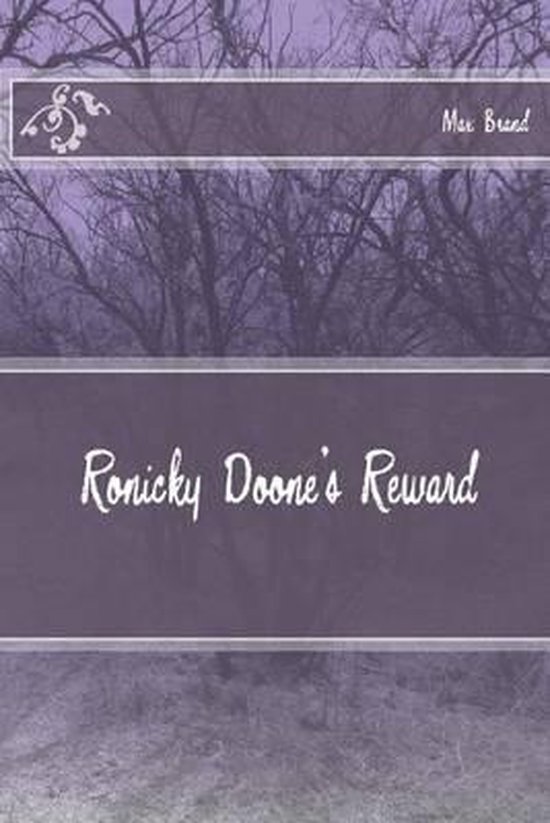 The rider shot down the street, swung out of one stirrup, and rested all this weight on the other; then, when his pony flung back on braced legs, still traveling with great speed, he leaped down and ran up the steps to the hotel. His eyes were shining. He whipped off his hat and beat the dust from the crown against his leg, a great cloud of it rolling lazily down the wind."Boys," he cried, "what d'you think's up? Old Steve Bennett's new man has come to town!"This announcement was greeted with such a roar of cheers that even Ronicky Doone turned his head. He was seated at the far end of the veranda, stretched low in his chair and so posed that the keen, hot sunshine fell upon all of him, saving one shoulder and his head, above which his arms were thrown for greater ease. He was taking a sun bath which might have set a lizard boiling, but Ronicky Doone enjoyed every instant of it. As he turned he literally flashed with color, turning from sunlight into shadow. For Ronicky was one of those dandies of the mountain desert who adopted the gaudiness of the Spanish-Indian habits. No band but one of carved gold could surround his sombrero. No ready-made boot could surround his ankles and slope with glove- fitted smoothness about his feet The red of his bandanna was glowing scarlet and of the purest silk. Silk also was his shirt, though of a heavier and coarser make. What vain, and almost womanly, vanity had made him have such gloves worked to order? The leather was as thin as a fine tissue, it seemed, and clothed his hand so that it hardly impeded the movement of the fingers in flexing. Even his cartridge belt, that symbol of all the grimmer side of the cow business, could not be allowed to remain as it had come from its maker. No, the webbing must needs be taken to some Mexican silver worker who wrought upon it, with infinite patience and skill, figures of birds and beasts and the strange flowers of cacti.He stretched himself in the shadow now, as if he enjoyed the coolness fuface, dark of skineyes and with a singularly youthful look. The strangeness of those youthful lines came out of the contrast with a certain weariness which, now and again, dulled his eyes. Just as one was about to write him down as a half-breed for his luxurious laziness and his olive skin, one caught a glimpse of that time-tired look in his eyes, and there was a suggestion of sadness beyond words.
Toon meer Toon minder