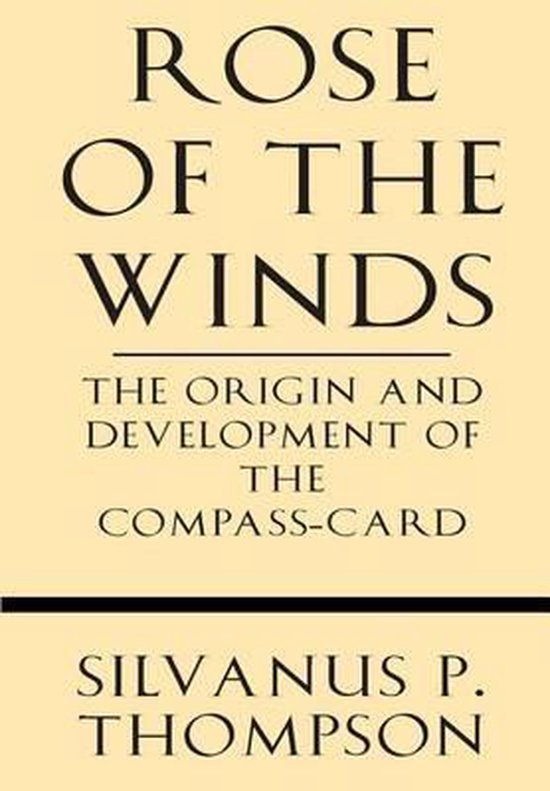 Rose of the Winds: the Origin and Development of the Compass-Card
By Silvanus P. Thompson
Excerpt
Although the construction of the compass lies outside the scope of this inquiry, some preliminary considerations are necessary concerning the origin of the compass itself; and these must be stated briefly. The mariners' compass, as we know it to-day, consists of a light circular disk or card, beneath which is attached a magnetic needle or system of magnetic needles. The card is provided at its centre with a small cap, by which it is poised movably upon a pin. The whole is enclosed in a hollow box or bowl covered with a flat lid of glass; and the compass box or bowl is suspended within two hinged rings of brass to enable it to conserve its proper horizontal position in spite of any tilting movement to which it is subjected by the rolling or pitching of the ship on which it is carried.
The card is divded out into thirty-two 'points' or 'rhumbs' of equal angular breadth forming a rose or star, and to these are affixed the initials of the names of the thirty-two points. The magnet needle, or system of needles, is affixed to the card parallel to the direction marked NS on the card, so that when left to itself, the card, obeying the directive force which acts on the needle, sets itself in a direction pointing (magnetically) North and South; the several 'points' marked on the card then indicating the several directions that the mariner may know in which way to steer in order to follow his desired course. The card is also usually marked at its North point with a fleur-de-lis or other distinctive sign. The magnetic needle is controlled in its pointing by the magnetism of the earth's globe.
It is no part of the present paper to enter upon the reasons for the irregularities which are found to exist in the directive force of the earth, and which produce those local 'variations' of the compass which the mariner encounters everywhere. Neither is there here any question considered as to the errors or perturbations due to the presence near the compass of pieces of iron on the ship, nor as to those due to the incidental presence of magnetism in the iron of the ship's hull or fittings; nor, again, as to the means for compensating those perturbations or correcting those errors.
The compass, as above described, has remained practically unchanged in all essential particulars for...
------------------------------------------------------------------------------------------------------------------------------------------
Windham Press is committed to bringing the lost cultural heritage of ages past into the 21st century through high-quality reproductions of original, classic printed works at affordable prices.
This book has been carefully crafted to utilize the original images of antique books rather than error-prone OCR text. This also preserves the work of the original typesetters of these classics, unknown craftsmen who laid out the text, often by hand, of each and every page you will read. Their subtle art involving judgment and interaction with the text is in many ways superior and more human than the mechanical methods utilized today, and gave each book a unique, hand-crafted feel in its text that connected the reader organically to the art of bindery and book-making.
We think these benefits are worth the occasional imperfection resulting from the age of these books at the time of scanning, and their vintage feel provides a connection to the past that goes beyond the mere words of the text.
Toon meer Toon minder