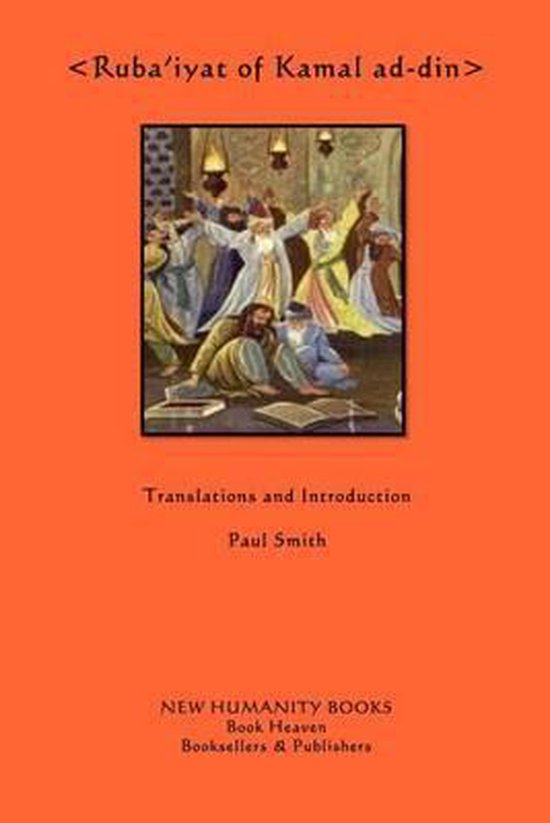 Translation, Introduction & Notes by Paul SmithKamal ad-din Isma’il (1172-1238) known as ‘The Creator of Subtle Thoughts’) was the son of the court poet Jamal ad-din and was one of the last of the great poets of the early days in Isfahan. Both father and son praised their city and the same patrons but Kamal ad-din considered himself not only a court poet but a Sufi or Dervish. His qasidas in the style of ‘Iraqi were greatly admired and some were said to ‘reach the summit of perfection’ but it is his many much loved human and divine ruba’is that his fame now rests upon. Here is the largest number of his ruba’is ever translated into English. Included in the Introduction… the Life and Times of Kamal ad-din and a history of the ruba’i and examples by its greatest exponents and a chapter on Sufi Poetry. The correct rhyme-structure has been kept and the beauty and meaning of these beautiful, mystical, loving, sometimes satirical four-line poems. Pages 170.COMMENTS ON PAUL SMITH’S TRANSLATION OF HAFIZ’S ‘DIVAN’.“It is not a joke... the English version of ALL the ghazals of Hafiz is a great feat and of paramount importance. I am astonished. If he comes to Iran I will kiss the fingertips that wrote such a masterpiece inspired by the Creator of all.” Dr. Mir Mohammad Taghavi (Dr. of Literature) Tehran.“Superb translations. 99% Hafiz 1% Paul Smith.” Ali Akbar Shapurzman, translator works in English into Persian and knower of Hafiz’s Divan off by heart. “I was very impressed with the beauty of these books.” Dr. R.K. Barz. Faculty of Asian Studies, Australian National University.“Smith has probably put together the greatest collection of literary facts and history concerning Hafiz.” Daniel Ladinsky (Penguin Books author). Paul Smith is a poet, author and translator of over 80 books of Sufi poets of the Persian, Arabic, Urdu, Turkish, Pashtu and other languages including Hafiz, Sadi, Nizami, Rumi, ‘Attar, Sana’i, Jahan Khatun, Obeyd Zakani, Nesimi, Kabir, Anvari, Ansari, Jami, Khayyam, Rudaki, Yunus Emre, Lalla Ded, Bulleh Shah, Rahman Baba, Baba Farid, Mahsati, Mu’in, Amir Khusrau and many others, as well as poetry, fiction, plays, biographies, children’s books and screenplays.
Toon meer Toon minder