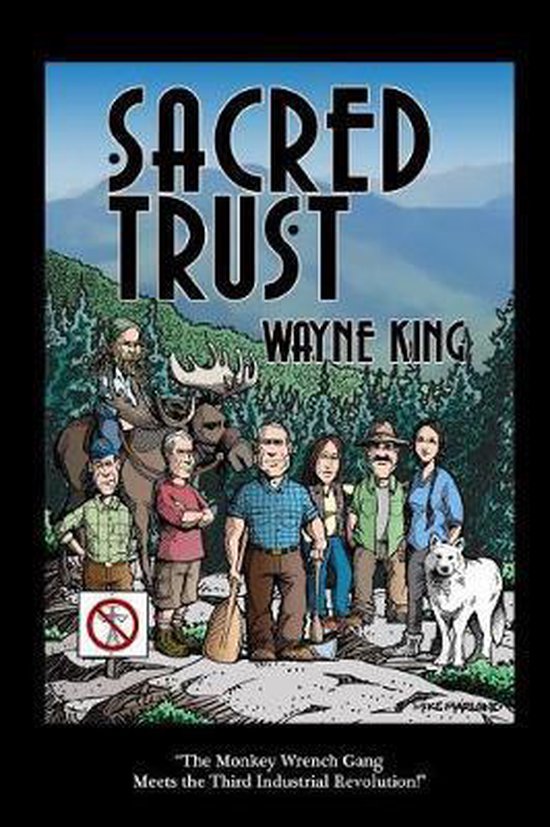 “The Monkey Wrench Gang Meets the Third Industrial Revolution”“An existential environmental time bomb threatens to explode an entire way of life for the people of New Hampshire’s North Country. Nine unlikely heroes are all that stand between the people and their worst fears . . . This is their story. ” Sasha Brandt, an Iroquois woman from Canada, is hiking the Mahoosuc Range with her companion, a wolf named Cochise. There she meets Daniel Roy, a guide and outdoorsman. After a unique first encounter the three continue their trip together ultimately finding themselves camping with an unusual assortment of people including a former Olympic paddler, a deer farmer, a retired spook - the first US victim of Lyme disease - and an iconoclast named Thomas who lives in multiple backwoods abodes in the Great North Woods and rides a moose named Metallak.They discover that they have one very important thing in common . . . a deep concern about a private consortium proposing to bring a powerline with massive 150 foot towers through the most beautiful parts of the state, transporting electricity from Canada to the toney suburbs of Boston and beyond, posing an existential threat to an entire way of life.Determined to do more than shuffle papers and employ lawyers, the compatriots form a band of brothers and sisters - along with Cochise and Metallak - calling themselves ''The Trust''. Armed with only their wits and a lot of heart they embark on a rolicking campaign of civil disobedience that would make Thoreau proud.Teachers and professors will find this novel a great resource. Adding a new dimension and lively discussion to classes on sustainability, or the American tradition of protest. In the coming “Age of Electricity” a principal battleground will be over who controls the production and distribution of electric power. Across America today, the battle lines are being drawn. Utility companies, many in an existential battle for survival, are pitted against advocates of a new distributed energy paradigm where small, renewable power replaces today’s large electricity generation plants. Most Americans notice that things are changing, but have yet to put together the full picture of what will be a sea change in life for every American. “Sacred Trust” tells this story in a novel about citizens banding together to stop one especially egregious powerline proposed in the small state of NH where the people deeply cherish their environment. The power company behind the transmission line proposes to bypass the state - like a giant extension cord - bringing power directly from Canada to the larger cities and suburbs. Like the oligarchs of a previous age, they intend to reap 100% of the benefits and to pass off a large portion of their costs through the generations-long visual pollution of the public commons.The citizens who stand to lose most are dead set against the project . . . but the political winds are against them. It is in this setting nine unlikely compatriots from across the political spectrum come together to take on the consortium. Calling themselves The Trust, they engage in creative civil disobedience to stop the project. A second group of citizen activists, writing in the style of the Federalist Papers, produce a series of essays in opposition to Granite Skyway in support of the actions of The Trust. One business writer, in a series of articles scattered throughout the novel, leads his readers through a virtual primer on the battle over a post-carbon energy paradigm, beginning with the 1972 election of Carter and the passage of the National Energy Policy Act including an 8 word amendment added by NH Senator John Durkin that changed everything.''Sacred Trust'' is a hilarious and vicarious, high voltage campaign to stop Granite Skyway, that leads the reader through the hijinks of The Trust, and the series of choices with which we all are currently confronting, or will be, in this new “Age of Electricity”.
Toon meer Toon minder