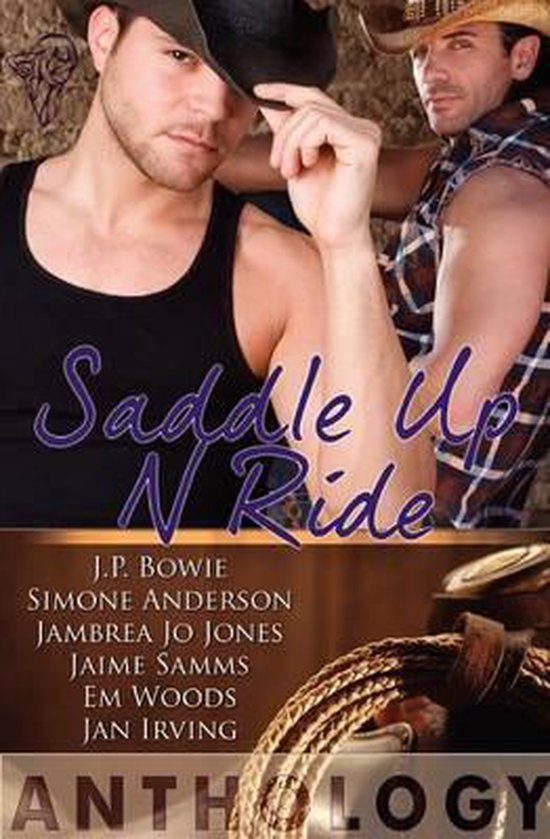 Ride 'em Hard Cowboy by J.P. Bowie When Sheriff Joel Harper, ex-wrangler, is falsely accused of assault and battery by a rich rancher's son, he turns to Royce Chandler and Charles Fletcher for legal advice. What Joel doesn't expect is to fall immediately in lust with young attorney Jason Sherwood, Royce's new recruit to his recently opened law office. Their budding romance is hampered by burglary, hate-filled graffiti, hostile neighbours and co-workers, and by Joel's own sense of responsibility to his younger brother, Toby. Can their love survive all that's thrown at them or will Jason decide the ride is just way to rough for him to endure? Roping His Man by Simone Anderson When Colton Greenleaf returns to his parents buffalo ranch after college, he doesn't count on long-buried feelings resurfacing or the pull of the Wyoming mountains luring him home to stay. He tells himself its only for two weeks, that he can put up with anything for two weeks. But, when he comes face to face with the man of his dreams his first night home, he isn't so sure. Now, he must figure out whether to take the chance on love or follow his life plan and face losing out on love all together. A Fistful of Emmett by Jambrea Jo Jones Emmett Longley just lost his job and home. When he hears of a ranch needing a jack of all trades, he jumps at the chance. What Emmett didn't expect was to find himself droolig over his new boss. And the man was giving off some weird vibes. Was Kit gay or not? Christopher 'Kit' Younger only looks at men to see if they fit the bill to work his ranch. He doesn't have time for relationships. He never has, and if he did, they would be with a woman. That was until Emmett Longley drove up to his ranch and applied for the job of foreman. Sing For Your Supper by Jaime Samms Taylor has left home, chased out by his family because he's gay, and pursued across the prairies by the man who violently assaulted him in his own home. Now he's homeless, friendless and using his charm and skills learned on his knees before his father's farm hands to pay for his meals. Matt sees something more than a desperate whore in the young rancher who comes to his diner in hopes a quick blow job will buy him a meal. He sees past Taylor's current circumstances to a man who just needs a clean break. Jack's Way by Em Woods Ben Morillo, a prominent architect, has a good life. He works for one of the leading firms in New Hampshire, owns his flat and stays out of the lime light. That is until his ex-lover shows up at his work months after their violent break-up, making a scene that gets Ben fired. Straight Cowboy by Jan Irving Cowboy Joshua Ryan can't stop his erotic thoughts about Matt James, the hearing-impaired guest he's taking into the foothills in search of wild horses. Matt James has dreamed all his life of coming out west. He's at first taciturn with Josh, afraid he's as close minded as some other hands they encounter on their excursion, but when Josh reaches for him unconsciously in his sleep, Matt has a tough time hiding his desire for a 'straight' man.
Toon meer Toon minder